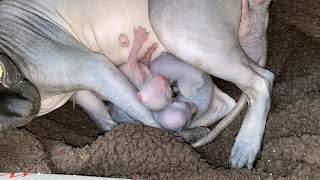 Prune told me with a series of short mews last night that things were finally going to get going. She has been so restless & the mews so unlike her usual chat that I knew we were on.

She got up & down all night, then at around 8:20am the “first” kitten arrived, breach. A boy. The placenta took a while, she got up and the kitten was dangling precariously. After resettling her delft the placenta came  & for the first time, I needed to help to cut the cord which I then anointed with iodine & removed the placenta from the birthing box. I congratulated Prune on being so clever even if it had taken ages to get started.
At 9:54 another breach blue kitten arrived, and I waited eagerly to see the placenta follow… but still several minutes later it hadn’t delivered. She pushed again a couple of times & there came a third breach kitten this tone black… she then stood up, this time with 2 kittens swinging away, then she squatted and perched to the side again to deliver the placentas.

Things were then quiet and after a couple of hours I thought I’d have a sleep… then from the side of the room I heard a kitten yell out. That was odd since she & her kittens were right next to me & I could clearly see all 3!

Going over to the furry black coloured radiator bed where I’d seen Prune earlier, and which I marvelled at at the time as while she looked so cosy & settled she never usually goes on it. I left her there not thinking she’d stay long… but she obviously got going kittening before I knew anything about it - as there l, found nestled amongst the folds of soft fabric I discovered a little blue kitten! It’s & it’s umbilical cord was dry & the little stump already shrivelled, a clear indication this was a kitten had been there a little while. I’d had the heating on as soon as the kittening began so it definitely stayed warm even while mum was busy giving birth elsewhere. This secret kitten would have actually been the first then & I think she must have had it when I went to the loo…. every time I have left the room since yesterday she has mewed and a couple of times today she got up from the box to berate me for leaving at such a critical time.

I think that this kitten probably arrived at about 7am & having followed me to the bathroom, because it was then that I noted a discharge and so had resettled her in the birthing box, thinking no more of it than that her mucous plug had come away!

Thank goodness that the little critter yelled.  It seemed to be quite ok despite the time it had spent alone. Warm & dry the dear little kitten had obviously been sound asleep then woken up very hungry & lonely 😩

All 4 siblings, are now settled with mum in a nice deep cosy box lined with vet bed & a blanket.  On first appearance they look to be all boys but I will check that again later on as I must admit, I’m quite bleary eyed right now & I might easily have made a mistake. I’ll confirm on the next update!

Well done my Dear Prunella Prudence you’ve done a fine job of delivering your litter… now comes the hard work of establishing them all to ensure they grow big & strong.

Please keep checking back to keep up to date with them. I endeavour to post regularly when there are kittens here, daily in the early days if I can! Don’t forget to message me if you have any questions or interest in Prune’s sweet kittens.