Naked Sphynx Cat Hampshire is a TICA registered Cattery in, Hampshire UK. I warmly welcome enquiries via email & through this website about my cats & kittens. You can use the contact form on site or  email direct by addressing your email to NakedSphynxCatHampshire@icloud.com.

If you’ve come here via Facebook, welcome your my website. This diary is updated at least every few days while kittens are with us, sometimes even daily, when there’s lots going on! For me, the diary element serves as s lovely history, a reminder of all kittens & their progress for the time they are with me. It doubles it’s duty by allowing the wonderful people who register interest in securing a NSCH kitten giving them insight into the earliest days of their kittens life & a way to take part vicariously though the power of the internet. And of course it’s here for the benefit of anyone who just loves the Sphynx breed. Whatever has brought you here, it’s lovely to have you & I hope you’ll stick around. 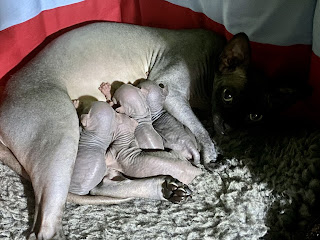 So today began early. The first feed I helped with was at around 3:15am. I padded to the kitchen to warm milk and fetch sterilised teats & syringes, returning with the supplies and readying a cotton wool ball with water to use to toilet the kittens (it’s used in an action that is akin to the mothers tongue, thus stimulating the kittens to wee/poop.

Settling on the floor, I reach in and gently pick up the first body that I reach and start to give the teat. Then comes the moment when the kitten realises milk is here and begins to eagerly suck. But wait, what’s that? I am slightly taken aback in the dim light of my day-break bedroom to see the round dark marble-like orb of an eyeball “looking” at me!

Of course this eye opening is entirely natural & expected it’s just always a bit startling to see this change happen. Weirdly, it’s almost as if I’ve been caught in the act doing something I should not!

This evening, one kitten has their eyes still completely closed but the others are at various stages of openness, maybe with one eye open, the other half open, or they’re both at half mast! More character will be seen in these adorable little faces as they flesh out, as the eyes open & their vision sharpens & they look to start taking on the world (or the world within their nest box anyway!)

Their ear canals are all still very tightly sealed closed but the ear, tiny as it currently is, is not tucked tight to the head any longer. It’s begun it’s epic change though you wouldn’t know it yet what a vast change that’s going to be! For now it appears slightly unfurled and is is shown quite well in the image used above.  As the kitten seeks to abate hunger, the muscles of the mouth and face are working very hard at suckling. With each suck & swallow the muscles tense & relax causing the ears wiggle back and forth. I do so wish I had an extra set of hands to be able to video this & share it as it really is the cutest thing.

It’s now evenings  Ive just finished another feed - as has Prune who worked in tandem with me. Dream team! Her kittens are now comatose, ball-bellied with milk, snuggled close into mum who is also taking the quiet time to catch an early evening nap.

I’m not surprised. Her job of being their source of milk requires a lot of energy reserves as with no respect to propriety, her kittens wake regularly feeding constantly  throughout day & night.

Prune’s body is being called upon to continue to perform magic. It has already produced these kittens in just 63-65 days from sperm meeting & egg to birth. And immediately it is then asked to procure milk in ever increasing quantities.

She is with the kittens almost constantly. I hear her giving little sing-song trills communicate with them & voice her contentment. She purrs often too, a vibration they’ll recognise and which makes them feel calm.

When she does take a short break, satisfied they are settled & she can leave the nest to care for herself she is ravenous. She must eat, drink & make herself comfortable and ready to go back if they stir.

Milk production,  like kitten development requires that the Queen acquire ample high quality nutrition that nutritious & calorie dense. With her appetite satiated she now needs extra fluids for that milk, so she must have plenty of fresh water.

There’s no doubt the female cat gives a lot of herself to ensure that her progeny thrives. I am unfailingly in awe of her. If one kitten begins whimpering while she is eating or drinking she might in the first hours or days immediately cut off her meal & return. As she gains confidence in them being able to survive her short absence she will listen carefully but continue to eat/drink however, if the cry is in a pitch that suggests it is in danger or pain she would return immediately to tend to them. I remember actually when she had her last litter, also her first, I recall her eating while her kittens were calling to her. This wouldn’t have been too early on but maybe a couple of weeks in. She was eating, hearing them but annoyed at their interruption. In response to this at the same time as eating she was grumbling in her chest throat. It was obvious inannoyance & frustration that they were not behaving nicely while she had a short, long overdue sustenance break. They’re not so different experiences to our human ones when our kids just won’t quit while we just. have. a m. cup.  of. coffee. (while it’s hot)!

Moving on, I’ve no kitten weight to note down for you again today. I have ordered (another) new set of scales which will arrive by end of play on Thursday. I’m not worried about the kittens weights at all. I can see clearly their beach ball tummies, & here their contented frequent feeding. I can see too that their flesh is filling out, meat is going on to their bones. If the constant feeding was coupled with disquiet that would signify a hunger/feeding issue. If they had then became weaker I’d be panicked but I can see that they are doing really well.

They’re being toileted by both mum & me & even in addition by Floozy who will take her opportunity to get hands on with the babies when I’m hand feeding. She’ll  get in close & lick anything on any part she can reach.  To be fair, I am pleased she is being so caring since she has never experienced kittens before. And I’m equally delighted that Pru is happy to let her (to a certain degree). What I’m not sure about though is if the kittens appreciate being washed/toileted right then since its is a distraction from the focus (guzzling food).

Bless Floozy though, she is so curious & so eager to join in. She is learning I suppose & actually, I rather admire her “can-do” attitude. Very commendable!