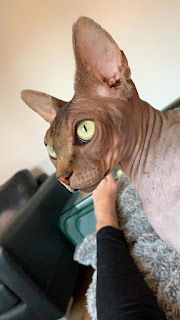 Dad - Oswald
Another busy busy day here at Sphynx Cat Central. All the adult girls got bathed. Prune was well over due as I let her be last time as she had only a couple of days earlier given birth and I’d not wanted to bath her late on in her pregnancy given her size. She sure needed it & the ear cleanse & manicure too! Those talons!!!

Sadly, none of my girls love water, despite my efforts to entice play so baths are a necessary evil. Noodle, who used to put up with it begrudgingly now fights to get away and comes out in hives (we use Pet Remedy room spray before & during bathtime as well as their shampoo all in efforts to de-stress this as much as possible. The results as ever are worthwhile. Noodle looks positively glowing being the lightest in colour she looks grubby quickest. Thanks to overzealous Floozy play she has some bite grazes around her neck area, bless her. She is often the instigator of catch me if you can, so she must enjoy the game. I am often run over or used as a springboard as they rampage through the bedroom or lounge.

Anyway, it’s nearly 12:45a.m & I’ve just given a late feed. I’ve noticed that in the last few days their appetites have gone nuts. It could be that Prune is producing less milk….they still suckle her a lot & she visits frequently to allow them to nurse, plus their tummies are never empty, so it’s more likely a huge growth spurt and milk becoming less satisfying.

I’ve also not seen any avoidance behaviour on Prune’s part as yet, but it won’t be long I don’t think as their first teeth are coming in. They’ll be over zealous, and nip her so she will soon begin to stop laying for them so much. She’ll start to grumble at them & push them away rather than leave them to drop off to sleep while suckling because they’ll get over zealous with their new pearly whites!

I’m now feeding around 40- 50ml between them at each feed I provide (4 times a day). The good feeding they get from us both certainly shows in their weights which tonight are Black (Pudding) 446g, and the Blue lads are 424g, 407g & 356g. That 356g weight surprised me a bit, he’s not looking like a 51g lighter kitten.

This is the last week that I will syringe/teat (Miracle Nipple™ ) feed them as next week they are going to be taking the next big steps. Lesson 1 is learning to drink from a dish. From there we will move on to weaning. And with that must come litter training since mum & her willing helpers will immediately stop performing toileting duty. Well, maybe Floozy won’t at first & she too will get a life lesson! Oh boy!

My beautiful daughter in law is almost at the end of her pregnancy. I’m on call for when the action starts - whence I  will drop everything to take care of my (feral) toddler grandson, Holden while his little sister is being born. Holden arrived almost a fortnight early so with only 1 week until the official due date left (as of today Sunday August 1st) it is quite literally an any time now situation. My plan is (hopefully) to start to wean & litter train after my new granddaughter has safely arrived. This will allow me to give it my full attention, however, if baby decides she’s too comfy where she is, with the appetites of these little darlings, I may well have to begin beforehand. We will see!