It was a week ago that these 4 little (getting fat) sausages arrived. It been a lovely week & (touch wood) it’s been & will remain free of fear or anxiety over any individual. I’ve been watching them & mum like a hawk, ready to step in at the first hint of difficulty. So much so that I had been unable to switch off & sleep , managing on micro-naps for about 4 days, listening for the slightest change in tone that might be a distress call. Not counting my chittens (of kittchens?) yet because it’s still early days but the fact that there is flesh going on bones & clear signs of decent feeding established is awesome.

What would be good was to feel that weights were accurate which on the birth days I suddenly discovered may not be all that reliable. By day 2 I was decided that my current digital scale was at fault. So, I purchased a new set of pet scale from a company I trust for the quality of its heat mats (PetNap). As this set bore their name /branding I felt that I could rely on it being money well spent and that having spent it I could reliably weight the kittens to see weight gain (which at this stage should be about >20g a day).

They arrived and I put batteries in. I set them up on the floor (flat and level) alongside my previous scales and I switched on, set to g (gram) as these are both able to work in 1g increments. I set to zero then put my drink bottle in the centre. Then I removed the bottle and pressed “tare” to re-set to 0 and weighed again. Differing amount. Now I know that’s possible and to expect 1-2 g difference up or down, but not 10g and more. I did it again, and got another different weight. Then I weighed using the original scale and the weight increased by over 100g. Hmmmm. My relief at a new and reliable scale now is evaporating fast.

I then fed and weighed every kitten (the first I re-did 7 times, the 2nd I redid twice, but having flatlined my hopes, the last 2 just once all using the new scale.

I then sent all of the images to a trusted fellow breeder. Now, let me say the numbers shown that the scales were reporting were showing weights that one would see for small sized newborns, and as Prune had had chunky sized newborns and who were now 7 days older these weights also were definitely wholly unreliable.

All of which means that the images I’d planned to upload to this diary this evening showing each of the kittens proudly revealing their weighty prowess are not going to be available. I’m sorry.

The scales are being returned and, guess what, I’ve ordered a third set, which claim to have 4 precise sensors. It should be here tomorrow at some stage.

Hopefully, these substituted images will make up for it and show you enough to compare the size difference in one week when you look back at the one taken last week on Friday when the family were moved into this cosy nest.

I cut off mums leg and one pretty rump here (I took these in the pitch dark so it was a guess) …. 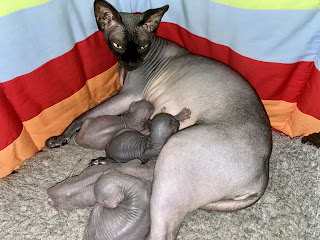 So having woken one of the kittens with my messing about in he dark, I had another go… I do love seeing that wide paw raised over the head of one kitten as he guzzles yet more of his mums wonderfully nutritious milk while laid alongside alongside his bro-squad ! 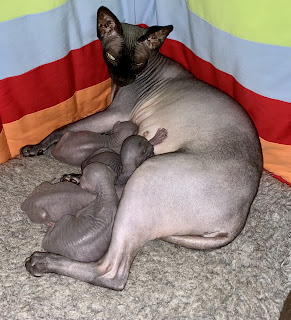