He is beautiful and oh, so very gentlemanly as I found out because he is the sire chosen to be the father of Noodle's first litter.

I saw an advert for Charlie's services as a stud at the same time I found Noodle for sale. As he was my favoured colour of Sphynx cat I felt right away that he might be an ideal mate for Noodle later so I made contact with his human, Sarah, asking for information about the stud service offered after which we kept in touch by email as Noodle matured.

Eventually, the right time arrived for Noodle to be mated and so as soon as she came into her 7th heat I contacted Sarah asking if Charlie was available for us.

Now that we knew that Charlie was available for us we set off on Monday, August the 14th 2017 travelling to his home in Gloucestershire.  I had been instructed that I need to bring Noodle's food but that litter would be provided. I also packed Noodle's beloved heat mat as it is always her favourite place to settle and since this would be the first time we would be apart I wanted her to have some home comfort.

Prune needed a stud of her own & it couldn’t be Charlie as he is her dad. Oz was chosen because, well, he is utterly gorgeous as you can see in the photos below. He  has a beautiful colouring of solid blue which I adore along with his wonderful pale green eyes.

2019 is his first year of being used for open stud and, having a perfect HCM scan and seeing the fabulous litters he has been producing with other females I felt confident that he was the man for my sweet Prunella’s first litter. 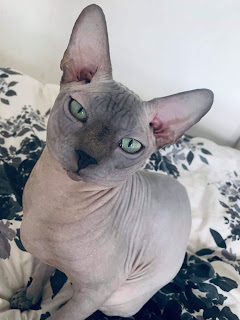 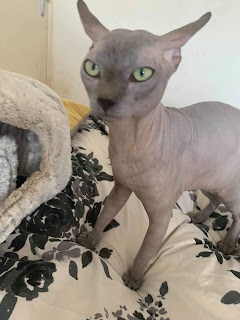 It is always the female cat who travels to the male. This is because with the mating hormones raging in her body in heat she is focussed solely on her urge to mate and therefore, less concerned with the disruption caused to her by travelling and staying in new and unfamiliar surroundings.

{{{ If it was the male who travelled the disruption to his 'norm' would very likely affect him and so he would likely be agitated or fearful being in an unfamiliar place, and so not likely to cover the female as intended}}}.

The female and male are kept together away from other cats/pets who may normally live alongside the stud. It is important that within the area chosen that the male has elevated places he can retreat to. This is because the act of mating can be ferocious and to the uninitiated observer can appear to be savage.

As the male cat becomes sexually mature, on his penis he has developed sharp hooked barbs. When mating occurs these needle-like barbs stimulate the female's vulva. They are the reason for the disturbing caterwauling and yowling choruses heard during feline matings.

After ejaculation as the male withdraws from the vaginal opening the barbed hooks trigger the female to release her egg and to elicit a final yowl as it induces a final immense flash of pain causing the female to strike out violently lashing at her mate. He retreats rapidly to those all-important raised platforms.

As soon as she is released the female rolls onto her back writhing convulsively to aid the semen in meeting with the egg, coating it and aiding successful fertilisation.

The female's hormones do not subside quickly. She remains active in her pursuit of mates and is receptive for several days. She continues to call and flirt so mating is repeated several times over a few days.

In a colony or in a neighbourhood situation where there are lots of tomcats, the continuation in the female's receptiveness and the way that egg releases only in response to sex, the pregnancy and subsequent litter (which might be up to 8 kittens) could all have different sires.

Pregnancy lasts just 63-65 days counted from conception/fertilisation of the first egg to its birth as a kitten. With such a short pregnancy, development in the womb from fertilised egg to kitten is rapid.

In the most extreme cases, there could be as much as 10-14 days between first and last conception within the same pregnancy. It is inevitable then that other kittens will be born at different stages of their own development with one or two possibly lagging very behind.

Noodle travels well so the journey was no trouble at all. She is also brilliantly well behaved and shoes no distress when we go to a home she is not familiar with.

On arrival, we learned that Charlie has a resident harem consisting of three very beautiful female Sphynx cats. Zipped inside her travel bag Noodle emitted a loud and angry hiss -  a shock to me as it was the first time I'd ever heard her angry or make a sound like that! Of course, she had just set eyes on one of Charlie's harem who had eagerly come to check her out!

Sarah showed me to her sitting room and brought Charlie in so that I could meet him. Then having exchanged the stud fee and chatted about what would happen over the coming days it was time for me to leave.

I was not worried at all about the quality of care Noodle would receive but still, it was difficult for me to leave on my own and to abandon my 'baby'. Sarah was kind and over the coming days provided me with lots of reassurance and kept in touch daily sending photos of Noodle and Charlie which was so much appreciated. Noodle and Charlie it seems who quickly became good friends.

After I left, the new couple were set up in a room where they would be undisturbed. As they settled in together Sarah had told me that Charlie would keep his eyes open wide for the entire night watching her.

The next morning came and Sarah was witness to their first mating (on Tuesday 15th August). Charlie had evidently had to hold on to Noodle's neck biting it firmly to hold her down and in place. She must have learned 'the ropes' very quickly - possibly wanting to avoid a repeat of that bite!

Proving himself to be a Gent in every single way all subsequent couplings were more gentle without the need for Charlie to use any restraint tactics. I received video footage of their second mating later that same afternoon.


Once Charlie had indicated he had lost of interest (Wednesday, 16th) he left the room, but he also asked to go back in after having had a cuddle with his mum (and of course checking that his harem was still in place).  Noodle stayed over with Charlie until Friday 18th August 2017.

Maybe due to having been away for the first time ever, having been faced with those rival females, and having lost her innocence, Noodle took about a week to ten days to settle down back at home again. It was quickly evident that she was changed. Though no physical signs were evident for a while yet, I was already convinced that the matings had been successful which was proved to be the case when in week 3 the first physical signs of pregnancy were clearly visible. For more information about her gestation please see the Pregnancy page.

We loved Charlie so much that we wanted to have a solid dark kitten that he had sired which we accomplished as he is also the father of Prune.