Well, as the clock hit midnight last night, nightclubs flung open their doors, people welcomed the dawning of freedom discarding their masks & any attempt to social distance….  It is almost as if there’s no such thing as being in the 3rd wave of a global pandemic. What’s your view? Do you feel like freedom day made you feel free or, in fact, has it had the opposite effect making you feel much less confident to go about your normal life?

Closeted safe & sound in our soft, bouncy, cloud-filled world of kittendom we are doing well. Prune is svelte-like again, regaining all of her pre-pregnancy shape not a stretch-mark in sight. Yes, it’s true she has floppy skin on her underside but she is producing lots of milk for her brood.

As week 2 progresses there are definite changes in her behaviour and indeed in the kittens. I’ve noted that now that they can go longer between feeds she makes that happen by spending more time away from them, though she stays very close & checks on them regularly.

When she is with them, the kittens will immediately wake and mew for feeding & she is happy to oblige and will remain with them allowing them all to fill well. They’ll eventually doze off en-famile, but with their tummies still rounded as each will reawaken to begin suckling again she tired of this & gets up and comes away. The kittens full bellies allow them plenty of time to “sleep it off”. I’ve continued to support her food supply & have concentrated the milk offered to the lower weight individuals first. Though their tummies are milk rounded, evidently they get second sitting or are just much less demanding than their larger brothers. This litter has no scabs on their heads as I’ve seen happen in previous litters. This occurs when the scrabble to feed is boisterous and access to the nipple is eagerly jostled for with those sharp claws constantly scrabbling for purchase in the blind search for their survival. Kittens are cute & sweet but when it comes down to it, this really is survival of the fittest and in nature the most tenacious are the ones who thrive. It’s a good job I’m there with my Royal Canin Kitten Milk Replacer & syringe feeders!

Now sighted, but still in their dimmed nest, kittens have noted that there is a door through which mum appears & disappears & where that arm reaches in to scoop them out. When getting hungry, rather than lay where they are yelling “I’m hungry” or snuffling blindly in ever decreasing circles in their search, now they come to the doorway, pushing themselves up tall using their front legs and call out to be fed.

It’s great development. Their limbs are being used and as they do, those limbs get strong. Soon they’ll be pulling themselves up to standing wobbling about to get balance before taking their first tentative steps & from then on abandoning the commando-like drag/shuffle they do now. It’s effective mind you. They’re surprisingly mobile from day 0!

I so wish I had more hands and could video while I fed so that I could record & share with you the cuteness of watching their ears wiggle back and forth as they feed. I’d like to be able to focus and shoot a wonderful portraiture shot to their beautiful tiny faces. I’m sorry I can’t. But, I bave re-weighed the little chunky monkeys now that I can in order to give you an idea of the pace of change. In 11 days they are at least triple the physical size they were at birth. 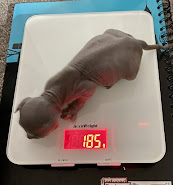 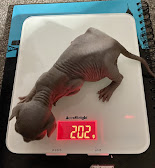 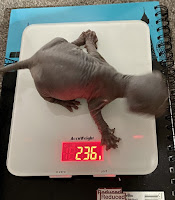