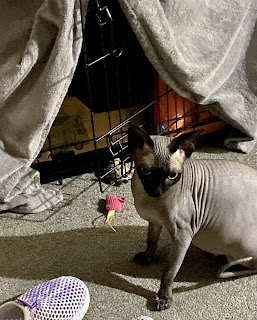 Bang on schedule, less than 2 weeks until d-day is expected, I discovered Prune nesting in my overlong bedroom curtains. I later straightened them only to discover her in them again. I had been expecting her to begin to exhibit some nesting behaviour this time around since she is not relaxed around Floozy, so as usual I was already been thinking about setting her up a snug. Luckily my son showed up and popped into my little storage loft to get the smaller of my pet crates down. This is now set up with a cot bumper around the beside, a heady throw blanket on top, and a snug box and blankets inside. And as expected all cats have inspected. It passes muster. So much so that Noodle, who is always vociferous when she has a mouse (toy!!!) has been making delivery of the toys to the cage door every day since. You can see them in the photo above with Pru sitting outside, the prey animals are awaiting being devoured!

I do take them away (so she knows Prune has eaten?) but, lo and behold, sooner or later I hear the usual “I’ve caught a(nother)mouse for you” yell and they are dropped to the ground back at the entrance. The pink one in the picture is one of her favourite mice! I mean it’s bright pink with a bright yellow cord tail. It’s mouse shaped, but she knows this is a prey item as much as she knows that the grey furry one behind is too.

What’s odd is that she (nor the others) has NEVER seen a mouse, nor ever needed to hunt and yet both she & Prune recognise that these mouse toys represent their natural food.

They have only done this with the mouse toys. Never with the fish or the bird toys with feathers. Noodle never did this for either her own two litters but began doing it (along with Pru) in 2019 when Pru had her first litter and, Pru began bringing them to her offspring & she joined in. But while Prune stopped fetching food, Noodle has carried it on and she most certainly recognises that kittens are on the way again and is taking great care to check on Pru’s welfare. You’ll see this care evident in the photo below as she lifts her head regularly to check up on her as she gets some rest.

I couldn’t love ❤ Noodle more. Since becoming a mother (in 2017 & 2018) she has been motherly to her own as well as to Pru’s babies but she also exhibits the same need to care for human babies too. Whenever babies have visited us, recognising the human infant as helpless she sits right beside them, and will gently go nose to nose with the baby to check him or her out. She then always looks to me and back to the baby. And if the child should cry she tries her best to give comfort looking to me to help her out. I have a new grandchild due in a few weeks & hope she will get to exhibit this same behaviour again. I do so wish she had been able to have more babies of her own though as she was a super mum, and she obviously wants instinctively to Mother. She more than makes up for her loss of reproductive ability by being a brilliant “Aunty”. 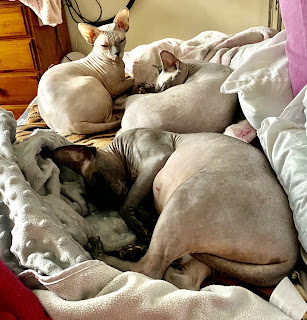 Prunella’s pregnancy is going very well. Her food is disappearing at a huge rate. The bowl that is normally needs to be replenished at most once a week, is now completely empty on day 2!

I’ve been feeling as well as seeing her kittens moving inside of her. It’s best doing this when she is sleeping because she is still the longest then. I have seen a head and a rump as well as limbs being pushed against her as they seek to reposition and stretch within her. One seemed to have stood up inside her to turn itself around! What must it feel like with so many are and legs, heads and rumps wriggling night and day? Certainly they’re growing at a speed & space is at a premium. Her breast tissue is beginning to be full & defined, her teats usually so small are now very prominent & enlarged in preparedness for those hungry mouths. The difficulty they have in finding the with no sight and no hair path to follow a heavy price for Sphynx mums whose tummies a quickly sore with scratches from those needle like claws they are born with. I do try as soon as I can to blunt them but they are so unbelievably small and delicate it’s not easy to do!

One thing I’ve noted & which did not occur last time though is that Prune has patches of skin that have changed colour, darkening to black. I spotted these “marks” on her inner thighs when I bathed them a week ago but now the same dark patch is seen at her anus and her swollen vulva. You can just see one of those dark patches at the base of her tail in the photo above. The skin is the same texture as the rest, it’s just a much blacker in its appearance. It will be interesting to see if this disappears again in the days following the births.

Everything is ready. I have the birthing kit complete with iodine for umbilical cords, life drops, suction device, sterile flannels, weighing scales, forceps, lubricant, stethoscope etc (hopefully needing to use only the iodine!) & I’ve also got supplies of milk replacer, steriliser, bottles, feeding tubes, colostrum, subcutaneous fluids & needles and manuka honey at hand should I need to step in to try to save a little life. I lost & saved one last time & on reflection believe that had I not been so frightened to help out sooner I would have saved both. This time then I’m determined to be braver sooner if I need to do so.

Although there are still 10 days to go, I’m staying close to home as Prune is restless & has been needy of being near to me. I want to give her the reassurance she needs by just continuing to be at home with her. I’m hoping that she will be as relaxed in labour & birth as she was before, and I expect Noodle to be stuck to the side of the birthing box ready to step in (quite literally!) . The unknown is Floozy. Pru has been hissing & low level swearing at her still, the occasional lightening fast series of left hooks and even seeking to bite her. Floozy seems oblivious to her pregnancy so I don’t know how that dynamic will play out when it all happens. I may have to close Floozy out of the room for a bit. I hope not.

Speaking of Floozy, she was 1 year old on June 16th and a week later went into heat for the first time and, began marking my home with her urine . 4 times on the cat exercise wheel. It reeked! I put in into the bath with napisan and 6 sterident tablets, turning it over a few hours before draining the bath and showering it down. Next day the enzymic cleaners I’d ordered arrived and I sprayed it with that & thankfully the smell has gone. I’ve cleaned the other areas she anointed too. It’s hard as it’s not naughty behaviour but a natural thing, but Pru doesn’t do it and though Noodle did, back in the day, not to the extent Floozy has. She was hard in heat and then, suddenly it was over. I’m going to try to curb her marking by trying her (?) to use puppy pads which at least can be easily disposed of and which will protect my floors from smelling since cat urine laced with hormone calling cards is strong smelling indeed. I so hope that the wheel is not re-used next time though!