Golly, the weeks go by so fast! Nature is an incredible wonder. The  body of the Queen really is a miracle, able to grow inside of her a litter of kittens in just 63-65 days from the first successful mating. By the time day 21 comes around to confirm the pregnancy we are a ⅓ of the way through!

Pru, bless her spent her first pregnancy in 2019 on bed rest having been injured somehow during mating suffering a dislocation of her toe that needed resetting & splinting under anaesthesia. This time, in 2021, having had 2020 off due in part to Covid 19 and lockdown (I am in the extremely vulnerable group & was required to shield for much of the year plus it was my turn to be on bed rest having broken my ankle in spectacular fashion requiring all three bones to be realigned and metalwork installed before I then needed 10 weeks immobile. It was ‘fortunate’ that Prune had not been mated prior to that happening as I’m not sure how I’d have managed!

But I digress, as this year has been kinder this far (in terms of our limbs at least) and we’ve both stayed mobile and so, with supplies gathered, expired products replaced we are almost ready for Delivery Day!

Hormonally driven throughout her pregnancy Prune has been very needy which has meant more cuddles than usual. As her tummy grows & her purrs roll endlessly on every breath, while I can’t yet see limbs moving beneath the surface of her skin I can lay my hand there & occasionally feel some little movements. They had better make the most of that stretching room as it’s going to get tight for space now! Hopefully I’ll be able to catch some video footage of the kittens moving soon! You can often make out a round head or rump or even a limb. It must feel feather uncomfortable. I remember my own pregnancies and the feel of my children kicking or shifting position and I had just the one each time!

It’s so lovely to be able to have Prune stay so active this time round. She still runs on the wheel, though thankfully rather less manically than she does when without her growing belly!. She still climbs up onto kitchen cupboard tops for a birds eye view and gets down seemingly without any problems whatsoever.

She, along with Noodle & Floozy, had a bath & her claws clipped one evening this week. This will probably be her last for a little while since, when the next one falls due, it will be almost delivery day &, being as it’s not her favourite thing & because she will be quite a size by then I just won’t want to cause her any unnecessary discomfort or duress! I may need to give her a warm wet flannel around her lady bits if I see she is unable to groom herself sufficiently.

She is eating very well, her food bowl emptying at twice the usual speed. My usually svelte & elegantly lithe cat is still eating as just as delicately as she usually does but is definitely visiting more often night & day. There’s never any restrictions on her food as she never over eats but now she must tuck in to meet the demands that are being placed on her body as her babies develop ready to come into the world.

I’m excited for the birth of course & hope it goes as brilliantly as it did last time with me not needed except to murder encouragement & to weigh and sex each one She really was incredible.

Admittedly though I am concerned over how she will be toward Floozy.  Despite mothering her greedily when she first arrived last September (at 12 weeks old), she has since taken a dislike to her. She definitely does not appreciating Floozy’s exuberant & precocious teenage ways!

Floopy Floo was 1 human year old this week - a teenager in a cat’s life. I recall Noodle being grumpy with Prune when she was at that ago too, but oh!how her energy was welcomed when Noodle’s last kitten needed company & entertainment!! Very soon Prune & Noodles last daughter (Nebula) were inseparable. I’m very much hoping that as the kittens grow Floozy will prove her worth and be as eager to babysit these kittens as Pru once was.

Meanwhile Noodle will probably want to be the doting ‘Aunty’ again. She never left Pru’s side once she heard that very first kitten yell! She absolutely loves mothering (human baby or kitten) and throughout Prune’s labour & after the litter arrived she was all too eager to step in each time Prune left the ‘nest’. Prune was not possessive at all then, so despite the atmosphere between Pru and Floo I hope the dynamic will work with the three of them just as well as it did when it was just two in our little family chowder.

I wonder how many kittens there are and what colours and sexes!!! I hope they’ll all thrive and need no helping hand from me. But if they do, I’ve gathered together my life saving supplies while hoping I will not need to use any of it! 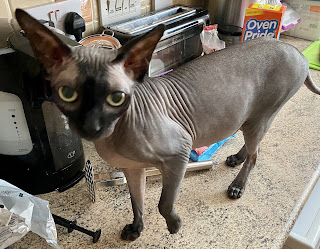 Here Prune is 5 weeks pregnant, still like Bambi but a little pot beginning to show! 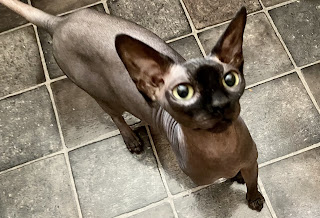 This was taken on the same day, her belly is only just beginning to swell
These last three taken today as I gave here the physical contact she is craving so often & laying my hand over her tummy feeling little kicks. 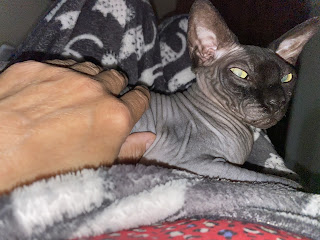 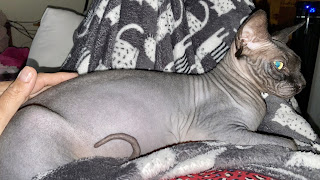 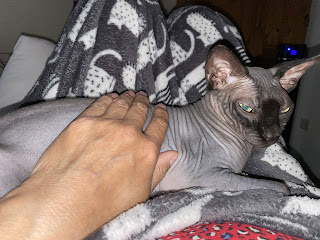