Lost mittens? Not these kittens! 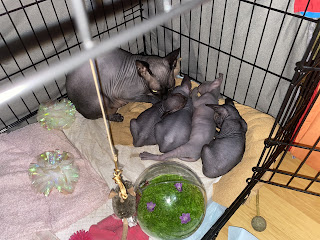 There were 4 in the bed & mummy said Roll Over!
What a wonderful few days we’ve had as the kittens appetites grow along with them. At each meal time I’m now giving at least 100g of food slot evenly between them already and they’re so excited about feeding times that I’m warmly greeted with their beautiful little eager faces turned up toward me they track my every move I make until those bowls are placed before them. At first each kitten would remain at his or her dish, but now one or two have been a little competitive. It’s a case of the grass is always greener, as one will push in, taking ownership of the next food dish along, and if pushing in with their head is not working, I’ve even seen a gentle teeth nuzzle too - not a bite, no yelp heard, just an attempt to be persuasive as they try to see what their neighbour has that they don’t. You always see the different personalities come to the fore around food, one kitten is a much slower eater than her siblings  and so I keep a close eye that her food remains hers & that she has more if she wants it. Around her, her siblings are much more gung-ho eating as if this was their last opportunity to eat! I am topping up their fast emptying dishes until they are done. And I continue to watch as sometimes they walk elsewhere, then change their minds & return for another mouthful or two. I’ve noticed one appears greedier than the others & interestingly it’s the lad who took so long to come around to the idea of solids - or this food - now there is no stopping him!

Once food is eaten, the litter tray might be visited, a short half hearted play, then a nice long nap to digest the food. They then wake for more play & litter tray use, by which time it is feeding time once more, around every 3 ½ to 4 hours morning until night & each kitten receives as much food as they wish to eat.

They’re living the cardboard box I have given them to play with… it’s closed but with a doorway cut in, the opening pulled up to create a barrier wall. Their first play fort. Once they are out of the pen, the box fort will grow, more boxes stacked on top of each other with various doors providing lots of opportunities for pouncing on a sibling from a hidden doorway or as they pass below. Such fun is to be had from cardboard boxes, however, a word to the wise: keep a close eye on any plastic parcel tape you may use in the creation of your mega structure  as they will eventually start to rip and can then swallow bits of it which could cause harm in their tiny digestive tracts.

I’m going to be giving them a first bath in the next day or two as their bedding is getting very mucky very fast now that mum is not needing to do so much with them since they’ve been using the litter tray. Having snipped their pointed claws this week and seen the gunk on their claw beds, it’s most definitely time !