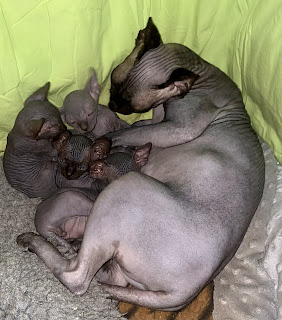 Bedtime stories…
Or a lullaby?
Dear sweet Prune. At regular intervals during the night she came to wake me, dropping on me a mouse (toy) to remind me not to forget to feed her babies! How cute!

So, after a good start yesterday, today was another messy day, with my food giving fingers feeling the bite! That’s good though since the bite is not purposeful at all but instead is their over zealous wish to eat (& not knowing quite how).

Once again one kitten seems to have no issues at all at putting her head down to eat from the dish as soon as I start her off. Her siblings are just not cottoning on yet.. I reckon, I’ve used a just over 100grams split between the 4 of them - with of course some lost to wastage that is dropped or missed during this training stage.

Throughout the day I’ve tried different consistencies to see if any is preferred, and to be honest, I’m not sure any way it was altered made a great deal of difference. Room temperature, or room temperature with different quantities of warm water added to form a soupy were attempted every few hours. The consistency of warm gruel is usually best at this stage as first of all giving it cold after having been in the fridge would be very alien to them being as they’re used to having their meals delivered at blood temperature from mum. Plus the tongue is used to the suckling shape so gruel is sucked and they will, once they’re interested in the meat , quickly learn to follow it downwards until they’re eating from the dish on the floor level.

I won’t be giving them food that’s fridge-cold for some weeks yet as their little bodies can’t be expected to cope with the temperature drop that would occur when eating it cold.

Meanwhile, this evening Prune has had her first bath in several weeks. She’s unfortunately is not a bath lover, & so to avoid risk to her or the babies inside her I stop bathing her toward the end of her pregnancy & only begin them again after the kittens are a few weeks old. This delay allows her kittens to use her scent while young & blind & it is their “safe place”. Considering the gap in service, she was very well behaved, and for her first sudsing she stood/crouched without wriggling at all however,  since she had had so long between her ablutions, I wanted to get 2 sudsings and a good rinse in in order to remove any soap residue from her skin. It was when she realised that a second scrub was coming her way that she thought to try to scarper. It took a couple more minutes is all, then she was snuggled in a warm towel, her ears were then cleaned (they needed it!) & her claws which she keeps very clean were wiped & then snipped. They’d got quite long.  Did you know that hair & nails grow faster in summertime than in winter? There’s the trained nail tech in me seeping out!

So now both adults are clean & they have had lovely fresh bedding to go with it. The kittens will not receive their first bath for a  couple of weeks. Besides, Prune is licking them so much every time they leave the food dish, making very sure that no scrap of food is missed or goes to waste & Noodle helps too sometimes by giving each kitten a second going over so I reckon I can safely rely on their attentions in that department for a while longer, plus I’d like them a little larger before I begin that process. Weaning & litter tray learning is enough for now.

No news there though. No sign of a first use of a litter tray yet - but with solids going in it’s only going to be a matter of time before (a) they feel the need & (b) Mum no longer deals with them.

And YAY 😁- it was worming day for everyone (with 4 legs) here today too. Noodle had her Termaworm pill which will see her sorted until September. Prune had a pregnancy & lactation safe syrup which was cunningly disguised by being mixed into not 1 but 2 strong smelling lickilix. That did the trick. She eagerly had the lot. The kittens received the same syrup, which was given in the mouth by syringe (they didn’t like it!)  before their 9pm feed. The worming for mum & kittens on this product is 2 weekly until 12 weeks.

As I am writing this I’m in my bedroom, but am listening to Prune warbling away to them in the lounge. I wonder what she says… when she sits on top of the Den, I think she’s encouraging them to come out, but at bed time, is it a song, or a story? And if so, are the words to aid the in their future life preparation ?