It feeeeeeeels like more tbh. My fingers are going through it with one of the gents while we made a breakthrough today with some almost unaided dish eating. The 2 kittens who made some progress today have both required starting off & eating from the tips of  my fingers with their heads following the food into the dish, then the dish lowered to the floor. However, if their heads went up for any reason I needed to lead them again. The 4th is very reluctant to have the food in his mouth at all, let alone eat any… I’ve tried beginning with manuka honey even to see if he will get a taste for that and follow it to begin accepting the gruel but nope, he is, despite his very sharp teeth having none of it. Still, it’s early days yet. Prune is still feeding them patiently, they’re all getting loads of food, nutrition & fluid whether having meat or not.

The litter trays have seen no action but tonight as I cleaned up after their final feed, & then renewed some of the blanket bedding in their den meaning they had to be “out in the yard” there was the first signs of interest with getting in & some of the instinctual digging I expect to see - while no wee or poop was forthcoming some noses had a cat litter frosting on them. Silly little things - they dip their heads to investigate it and is sticks to the moisture there. They then lick their noses to get it off & so it’s stuck to the tongue which means they sit comically try spit it off!

I can’t wait to show you photos of them eating, it’s so messy getting going & both my hands are dripping with meaty soupy gloop that’s not what I want to get all over my phone! Sorry. I will aim to get some new images tomorrow so you can see the latest changes in their sizes!

Meanwhile I’m just off now to rub Savlon cream into my latest puncture wounds! I’ve never had such a reluctant starter! Prune is doing too good a job evidently! 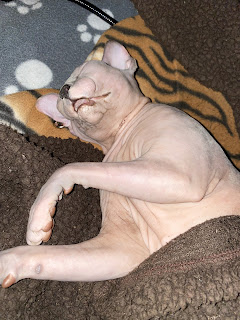