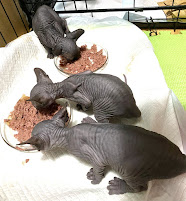 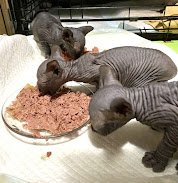 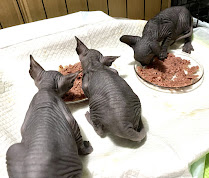 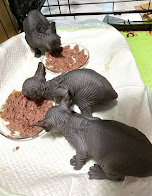 Hoorah! And Hip Hip Hooray! Today all four kittens ate solid food unaided! Already in just 5½ days they know that when I appear food is imminent & they’re coming out of the den in order to greet me! What a change! Not only that but the litter trays also saw action today too (in fact the first was overnight!) ; I’m so impressed that these incredible creatures never need to be taught, instinct telling them that this gritty substrate is for them to poop /wee into & mostly they will instinctually bury it too (though I watched one today who was missing this action - I’m sure it will follow very soon though.

What a result though!!! I’m thrilled as even Mr Stubbornpants ate with an appetite that was astounding especially considering his up until now point blank refusal to even look like he enjoys eating. It turns out he does, so what changed? I’ll tell you - I simply offered him a different food! Who would have thought that he would refuse his BARF food! And that’s certainly a first for a well cat (and he is most definitely not unwell!)

Just look at him go!

The food he is tucking into is a veterinary recovery food - let’s call it a “triple strength rocket fuel” packed as it is with tons of added nutrients & with an especially strong aroma which, being a recovery food is designed to entice a lacking appetite toward eating. I didn’t even dish it into a dish so sure I was that he would turn his nose up at even this! How wrong I was! Golly, I’d delighted to be wrong & so, so glad I had this sitting ready in case of illness in a cat or kitten in the supplies cupboard & that I thought to try it out!

My aim then as we go forwards is to give him this on its own for a day or maybe 2 then begin to transition him to accept the other food by mixing a small quantity of the other food with this, then to gradually over the next few days continue to adding more of one while reducing the other. With luck he will once he has the hang of reliably eating solids he will more readily accept (& like!) the food he should be having.

Hands more free today then, I’m so happy to have finally got some new food themed photos to share with you. This is how they look when it’s  “grub’s up” time!