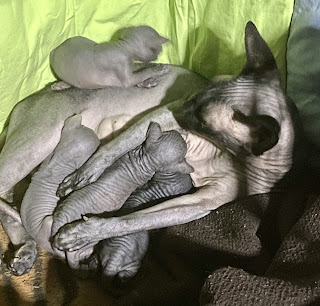 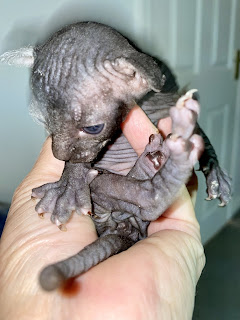 We are at day 16 & things are beginning to get exciting because now seeing & hearing, with strength and the ability to begin to walk the kittens are beginning to be attentive, eagerly mewing & looking at me as I sit near to attend to them. Previous litters of kittens quickly learned to recognised & associate my appearance with food; their excitement was understandably exuberant. I didn’t however expect the same level of interest from these at this stage (given they don’t want or need my food offerings just yet) . What their eager interest and craning necks does show though is how curious they are about the world outside of their snug little den. They are not yet ready to venture out but have space within it to move around & explore which I’ve seen them doing as they gain strength & coordination of their limbs.

They’ve just been weighed & they’ve just received their first worming dose - surprise! They didn’t like it!. As I placed them back in they were eagerly licked all over by mum who was making sure they are ok & that she wasn’t missing out on something that is nice - surprise - she wasn’t! Prune hates worming time - despite manufacturers telling us they are “pleasantly” flavoured to appeal to pets for easy worming. Pah! Not true! She is like inspector Clouseau, no amount of hiding any form of treatment gets past her!

Despite being indoor cats, my girls are wormed regularly. Their tablet treatment is given every 3 months.  Being indoor only that they do not get worms via the normal routes other cats would, plus being Sphynx do not get fleas (see info below) . Additionally I have no other pets who might bring worms or fleas into the environment. All that being said, the clear veterinary advice (yes, even for indoor kept animals) is always to treat for worms & *fleas as standard.

During pregnancy & lactation Prune cannot have her usual tablet & so I change the worming medication accordingly so as to protect the pregnancy & feeding kittens. Although the cats are treated, it is also vital to give the kittens worming treatment too, even ones as young as these.

Panacur is one brand that I use and is well tolerated (though the taste hated!) & another is offered by Beaphar who at least make efforts to make it taste “pleasant”. Both brands offer the treatment as a paste/cream or as a syrup both of which are suitable for giving to kittens at this life stage. Hoping to go with “pleasant” I have begun with the Beaphar paste/cream & this is dosed in a schedule as shown here:

Kittens and puppies: Treat at 2 weeks of age and retreat every two weeks until they are 12 weeks old, thereafter they can be treated at three monthly intervals.

Nursing queens and bitches: Treat at the same time and as frequently as their kittens and puppies until weaning.

To understand why worm treating such young kittens is so important & how they can be infected while being in the den & maternally fed, the PDSA website provides the following information about worms in cats & kittens:

Worms live in the intestines, steal food and cause damage to the gut lining. Although worms rarely cause serious problems in adult cats, they can cause very serious illness (such as dehydration, anaemia, gut blockages and even death) in kittens.

Kittens catch worms from their mother’s milk and adult cats catch them from fleas and hunting (rats, mice and birds etc).

There are two main types of worm that affect cats and kittens in the UK:

Because the microscopic worm larvae/eggs can even live outside of the gut it is possible for them to be carried in to the home/cattery on footwear & though I do change my shoes as I come inside you can appreciate how simple it would be to accidentally bring worms into the environment which could then infect an indoor cat. Another route in for work larvae/eggs might be via contaminated food.

Work treating my cats, & treating these beautiful kittens will ensure that they are protected from the harm that worms can cause & will ensure that all of the nourishment provided by the food they eat will feed them & not a clew of unwelcome worms who happen to be residing in their intestines.