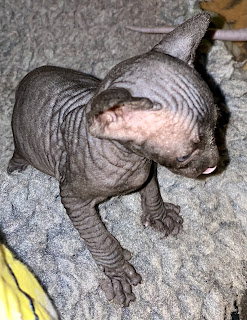 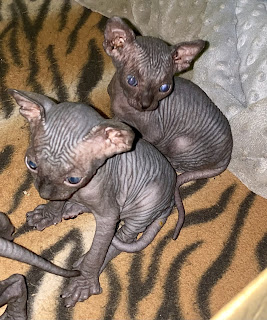 I hope you’ll watch on as these little cuties change over the coming weeks! Why? Let me explain….

Having moved to their new digs, the same den, for security & comfort, but now with outside space as I begin weaning them.

Typically confining them as I have doesn’t work for long at all since once they’ve discovered the world is a bit bigger than their den they will quickly become curious & find they can quite easily lift up the padding with their noses and simply walk out through the bars! Or climb the padding & topple out.

Of course the rocket fuel of having their first tastes of meat helps this process along since they will soon have so much energy to begin to climb & run about, plus will realise I am the source of this food and it comes from the kitchen. Why wait for me to bring it when they can demand it when I happen to be headed in that direction!!!

Prune has been ready for me to get this process underway - today she came to me with a mouse! She will appreciate her kittens being a little less reliant on her as we move forward. Oh & she is also rather keen on helping & finishing up what they don’t eat & licking every last trace from her children after they’ve fed!

As always, it’s a case of my not enough hands in the early days…meaning I can’t show you the mess we get into - my hands are busy deterring two eager adults from eating the food before the kittens ever get the chance. Plus I generally need to show them how to eat

Thankfully Noodle tends to hold back politely waiting until either a stray piece needs her hoovering abilities  or the kittens have lost interest in the food offered. Prune is a different story since she wants the calories to produce milk & will take it where she can get Not

I began the event by putting a sprinkling of litter into the two trays and showing then to the kittens. They are usually keen to scratch & dig about, the their bodies being triggered by this noise, feel & movement. It’s remarkable how they just know this is where to go & what to do.

Next I put some dry food (kitten complete Natures Menu) in a dish to see what they did. One of the blue lads got straight on with it while the others just walked through the dish, the adults diving in to rescue the scattered bits as they ricocheted off in all directions. One blue buy seemed keener of this dry than the others.

Now to the main event. Meat. I begin them with Natures Menu kitten which has undergone a revamp since last year. Now rather than in pouches of 100g, it’s tins of 85g plus there’s a new second flavour been added.  I start with easily digestible chicken. It’s been prepared by being lightly steamed once sealed into its container, thus retaining all the nutrients, while killing off any pathogens that might hurt a little kitten. While raw food is prepared frozen (as a weaning paste), this approach feels better for me on several levels - given that a£ ) I don’t know the preferences of their new families once they take them home and b) I’m lacking in freezer space . This steamed food is BARF but is more similar in appearance & texture to commercial wet food important for easy of their new families if they are transitioning their kitten down the road a bit. I do always recommend if making any change that a VERY slow transition is carried out at any age, but with young kittens the new family is always advised to keep to using the Natures Menu for a few months at least before beginning any make any change to their immature digestive systems.

Meat onto shallow dish, I mashed it with a fork & given they have teeth I thought I’d see if they needed it made into a soupy gruel or not by offering it as is. The black girl was straight in there once I’d opened her mouth & given her that first taste. Her siblings were not quite as quick on the uptake, walking through it as they tried to get to different positions. As I say, this early stage is very hands on with me covered in meat bringing kittens back to stand by a dish. This means though that I can’t provide images of this comically messy introduction.

Each kitten was keen to sniff, just not sure how or what to do. One of the blue boys had appeared to enjoy the dry grasping how that worked right away, but he was not so quick on the uptake with this. One by one I opened mouths (oh the teeth!) and popped food in, they have no idea how to eat but some does get eaten some how. They are eager for more and will bite at my finger in anticipation. They don’t eat much this first time but the synapses of their brains will be firing like mad & their bodies will enjoy the experience. Their learning will be rapid as I lower by finger down leading eager mouths into the dish.

Noodle & Prune washed up dishes, kittens & even the foam floor I’d put in the dens “yard” as insulation from my cold laminate flooring. I popped kittens back in the litter, but slowly they headed back inside their bedroom to digest this new food!

Water will be introduced once I know they’re safe (i.e a little more agile) for now mum continues to provide them her nutritional liquid nectar as this is both a food & a drink.

Over the coming days as the kittens come to love their meat, they’ll continue to suckle (in fact because they’re raised in an underfoot way, they’ll want to suckle Prune until they leave us but by then, when they are allowed (by her)  access,L to it it will be more about comfort & purring than anything that’s left to actually come from the source.

Once Prune has seen they are well weaned her instinct presses her to still return to lay with them but to save hungry, now much stronger assault of her delicate bits, it will be more often on her front rather than her side preventing their access. Nature & nurture has its way of ensuring that the next generation become independent & that the mothering female can reclaim her body & recover her lost condition.

Speaking of this, I keep Prune on a “cat & kitten” formulation food which gives her the calories & vital nutrients needed - she will naturally begin to cut back on the quantity she eats eating only what she needs. She is a delicate eater in general, different totally to gutsy neutered Noodle who will, because she is without the regulating hormones, easily gain weight.

Noodle is so gutsy that, once retired, spayed as she was during her unfortunate second c-section, at the end of her second ever pregnancy at when she was carrying the extra weight they put on then to sustain growing embryos & start producing milk. Because of the timing of this & a single surviving kitten again, she never lost the extra weight. I’d  continued free feeding assuming she’d naturally adjust her appetite.

As I fought for ways for her to get slowly (always slowly with cats, never a fast diet/weight reduction!) down to a reasonable size/weight, eventually after trying different approaches I migrated her to a timed & limited portion diet which would be dispensed regularly over the course of a full day. This approach worked wonders but it took a good 2-4 years of my trying different things which included “lower calorie” formulated foods, free fed & slow fed. Her gluttony was (is) immense & she was a “wide load” - which with no fur to hide under made it blatantly obvious plus more importantly it made for an unhealthy cat.  Now that she is a healthy weight, she is back onto the same “full fat” food variety as Prune - albeit restricted.

Prune’s food continues to be free fed as an unspayed lady & is protected by being safely stored in a microchip programmed feeder which allows Prune to feed without being harassed, while denying Noodle access. It might be that when she retires I will need to change her routine too…?

I had a cat called Floozy too. Right from her arrival here at 14 weeks, she had terrible digestive issues which needed daily steroids & which sadly meant she could never be bred from as I’d hoped to do. She was spayed & despite being at the time a kitten (under 12 months) she too was a glutton who in the end was better suited to a timed feeding approach with an appropriate portion size for her life stage.

She was boss cat right from her arrival & she also became devious. She would climb on top of Prune bullying her as she ate from her microchip protected feeder. I ended up making a cardboard screen/guard so only Prunella’s head could be there to access her food.

What I’ve learned is that there’s no right or wrong for any cat at any life stage. Their feeding is very much as individual just as their bodies are. The important thing is to keep watch & be prepared to try different approaches as needed .

With Noodle & Floozy slow feeders (to slow eating of greedy cats while challenging them to wok for their food - as they would in nature) did not work. Free feeding didn’t work, even with different food types. But the dispensing timed basis turned out to be a game changer (& I’d been so against it!)

Kittens should always be fed kitten formulation foods, but even they can be prone to weight gain if they’re gluttonous - which could highlight an under Health issue so see a vet for testing & advice.

The meat-fed kittens are settled & quiet now . I’ll offer the food once or twice more tonight - they’ll soon get the hang of the multiple offering & demand that I feed them NOW! Rocket fuel it is - no doubt about it.