When attending the vet recently I thought I’d purchase some of their clumping cat litter. I have a pal who uses it and gets on ok with it. I DO NOT know how. Terrible stuff. I should have listened to myself and gone to Bitiba as I usually do and invested in a decent quality litter. I have since done so and await its delivery. May it please arrive tomorrow so I can change it out at the earliest opportunity. Why do I do this to myself? I frequently go in to feed and scoop her boys when she goes away. I know her litter is rubbish quality. Lesson learned. Mind you, I do enjoy experimenting with litters. With varying results.

Before Floozy I could happily use eco type corn or wood litters (always the clumping kind!) but Floozy is not keen. I very much like Tigerrino Fresh, a clumping silicate litter however, the grains are very fine and because our cats have very deep footpads it does travel with them despite top entry trays & litter mats etc. I’m currently using some multicat fine grained clay litters. They are due to the clay however quite heavy which with my back is a problem so I will likely go back to Tigerino. Scented litters are a gimmick  - maybe in a single cat household they are noticeably fragrancing or a smaller room might concentrate it a bit more. I look for tight clumping litter & advise litter is kept deep. This way, you can scoop under & lift a tight ball of soiled litter leaving very little break off. Silicate is said to seal the chemical that makes urine smell inside allowing the water content to evaporate and this antibacterial and also this works to petrify the poop. Not that it remains in the tray long . I try to keep right on top of it - which with (currently) 7 poopers, one of whom has a colitis issue (Floozy) means that I am kept rather busy especially at the two top entry trays currently in use. True to form, as soon as they are able to get up and into them (& back out) the kittens choose to use these too. When the new litter arrives I will add a third top entry tray there and will remove the open tray. The side entry one is visited now only when someone can’t wait and there’s a queue! The only thing that haven’t learned is how to go in /out of a litter tray door flap. I remove these as they are difficult for small learning babies to get to grips with amd by the time they would be big enough they’ve chosen the top entry trays anyway!

A previous family who took 2 kittens in 2019, Karma & Lux a blue and black pair for the same litter (same parents as the current litter) where trained to use the toilet. It is something I’ve considered embarking on . You buy a kit with a system of rings that sit on the toilet seat, first moving the litter tray to the bathroom as close to the loo as possible, you then put litter in the full cover ring on the toilet seat and encourage the cats to use this. You progress through a series of rings about 3 more rings each with larger central holes thereby the cat is encouraged to learn to balance on the toilet seat squatting over the toilet. They can’t however lift a lid, nor can they flush! A Geberit toilet with a flush sensor might work which normally a person could trigger a flush by passing their hand in front of. Positioned well the cat passing it could do the same perhaps?

This couple did a great job of removing the need for a litter tray, buying litter and scooping - that was until the man came home one evening with a tiny foundling kitten who of course needed a litter tray… the cats started to use the tray again. I believe this is because it’s instinctual to dig. Just before starting kittens onto their weaning I put a shallow litter tray in with them and they dig and squat with no training at all despite still being toileted at that stage by mum (& aunts), so the training they had undertaken was undone and the cats by choosing again to exhibit their natural behaviour had exhibited a choice.

I’ve an auto scooping tray too. I used that with one cat but no way is it able to be cleaned just once a month. The idea is that the cat used the tray and a sensor knows they’ve exited. After a pause it rakes the (non clumping silicate) litter while raising a hopper lid into which it deposits poop before the rake returns again. The raking is “stirring” the silicate litter which is as you’ll recall designed to allow water in the urine to evaporate while keeping hold of and grabbing the amonia. I just didn’t find it that great. The cartridges are disposable which is meant to mean you never need scoop or touch the litter but they are expensive and don’t last a month. I bought a lm accessory allowing me to refill a plastic tray. It made it cheaper but I still needed to empty and clean a tray. For me it wasn’t a win. There are a couple of other auto trays which do get good reviews ~ the litter robot is one, and the litter genie is another. The genie you plumb into your toilet waste system. It has plastic beads as cat litter which are washed and dried at every use. Of them all this appeals to be most however, it does require an electrician and plumbers and space beside your toilet. The worrying aspect for me is that the plastic beads won’t all be permanent. Some will be stuck to poop and be flushed away. This has an oceanic environmental impact that I just can’t live with, despite never needing to buy regular cat litter (only “top up” beads).

The other kind of tray I had was one you manually rolled. A mechanism inside would as you turned it (once) filter out solids into a lined hopper draw leaving the cleaned litter after a rotation. The hopper could then be regularly changed. Hmmmm, looking at the mechanism which in it’s resting position is now over the top of kitty’s head, this was not a particularly clean system.  No.

It’s the experience of that manual one that’s stopped me seeking out a robo litter box since this works by the rotation method.

What about the litters that are flushable? I did use these for a time, following instructions I checked it was ok to do so and I duly began flushing. That was great. However, pretty soon the drainage outside was not doing so great and it become blocked. Despite carefully doing exactly as was prescribed.  That episode proved expensive. I don’t flush.

So, of all the trays I’ve bought and tried,  I’ve gone back to standard scooping & the only adjustments I’ve stuck with are the top entry trays which satisfies the cats desire for privacy and to dig, looks attractive (I have Modkat in White & in Black and I have the cheaper and more utilitarian Savic as well). And I’m not using cheap litter again either. No. No and No.

On a more pleasant subject, there’s the fact that a certain two kittens have learned the sound of the auto food dispensers I use for Noodle & Floozy. Prune has a microchip feeder and is very good at eating in moderation however, Noodle, once spayed is prone to weight gain & though she had a microchip feeder too, and she also had diet food after a year on that she still gained weight. She has no self regulation. While I’m sure that we can all sympathise with that, she had become a wide load & I needed to do more to help her. I did this with the help of my first auto feeder. This allowed me to control when, how often and how much she ate. Finally she lost weight. A little too much and I’ve allowed some to be put back on. I need to reign that back again slightly which I’ll do over the winter. I added a second auto feeder to manage Floozy who has no off switch and is a very greedy madam. Again, I sympathise, but my job is caring for their health. She is on steroids and this makes her extra hungry so, the inability to have food all the time afforded by these is vital. These units allow you to record your voice (some models can be controlled via an app! ). I’ve tried to synchronise the two to go together but I’ve not quite got it right. This means that food drops in one, then about 29 seconds later, the recoding saved in the other plays before it dispenses. The sound of the food dropping to the stainless steel bowl is all the invitation Floozy needs. From wherever she is, before the last nugget has fallen she is there! Now she is joined by two other hungry hippos Humphrey and Grogu who as you can see, tuck in beside her. Dear Noodle, she sits out of the picture as she knows that here kittens eat first (though doesn’t realise that this means for their food not hers!) . So these to chaos are eating Natures Menu and a small quota of Orijen too! What a cheek!

Yes, well spotted, unfortunately the water is right next to the food and this is not the correct textbook set up. Food and water should not be together. Sadly, I’m limited by the availability of electrical sockets. Sound familiar? 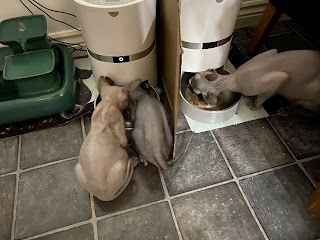 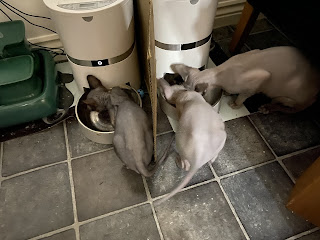