It’s 11.05pm, the boys are currently running riot in the lounge hallway and bedroom. Every day they’re discovering new heights of mischief (whereby they manage to climb or jump higher than before!) and whichever brother was first to discover he can, soon shows off, demonstrating to his siblings this new move and before long I might catch one or the other either going for it or maybe tentatively attempting to do the same or maybe the more cautious will sit looking at whatever it is at length, as if very studiously thinking it all through, the steps and positions needed so that they can do it too.

This evening I’ve bathed them all so they’re feeling smooth & clean & looking rather dapper & “fresh. Ears have been carefully cleaned - golly can young master  whinge! He ready does like to make it a drama when he doesn’t want something. His ears were very waxy compared to the others this time but Vincent had the worst nail-beds, but the soaping with Johnson’s loosened it and the congealed oils were consequently no match for a biodegradable baby-wipe. Next claws were all trimmed as short as I dare to take them, in efforts to buy their new parents extra time before they need to tackle this themselves. It’s nerve-racking to do if you’ve not done it before and are not used to handling your wriggling tiny-cat in the way that’s needed. However, because our Sphynx become accustomed to being handled regularly for their baths and grooming (whether done as different tasks or as I do as part of the bath-time ritual, it’s a task our cats, while they won’t love it, will tolerate it (despite voicing their anger loudly to anyone who will listen). If you’ve a wriggler, even if not bath-time, using a towel to make a cat burrito is helpful keeping the three limbs you don’t want to work on from getting g involved. I dont mess around, I go about the task smartly, the paw held in one hand to depress between my finger and thumb each pad in turn to expose its talon. The baby wipe in hand I use it to pinch on either side of the claw then rub my finger and thumb together cleaning the gunk away rapidly. Some claws do need a little more effort than others, particularly in adults, but it is not arduous work. I work all 5 (or 4 if back feet) claws then I get the clippers, with the claw guard in place, snip the tip of the talon away. The front claws need more trimming than the back ones, and like human nails, they grow faster in summer. Sometimes, particularly back feet, I might go 4 weeks before needing to snip some claws Experience of course will allow any new parent to gain the confidence required and with that more control of their cat - they will appreciate the task being done decisively, so ignore the yelling. Be gently firm. My new owner handbook contains a diagram showing the part of the claw to clip, and the part you want to avoid as accidentally snipping too deep will cause a Yelp and some bleeding If that happens, styptic powder is your friend, and I do keep a small amount in my cats toiletries case. I’ve needed it three times but only used it twice (the first time, I didn’t k is about it!) . The powder on a dampened and anointed cotton wool Q-tipquicy and painlessly stems blood loss.

Anyway, with baths done but they’re ready for tomorrow’s trip to see the vet. I’m looking forward to getting an updated weight for each of them & after they’ve been examined one a the other I fully expect for each of them to receive a clean bill of health. Now they’ll be required to brace themselves to receive their 2nd vaccination. At least this time though, they won’t also have the follow up large bore needle to insert a microchip. Hopefully they’ve forgotten all about that by now!

I’ll be back to provide an update tomorrow evening 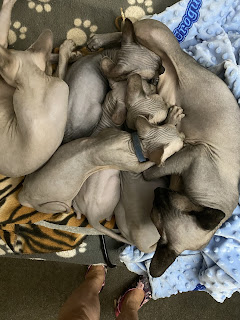