These 4 little soldiers visited the vet today, along with mum. We were stopped going there and leaving several times as folk spotted and wanted to admire them with photo calls made by the vets receptionists. Best Hollywood smiles by the lads!

In with the vet, mum had her go first, glands, heart, lungs, tummy, limbs, feet, ears, eyes & teeth all passed muster and she then was weighed before receiving her vaccination. This actually was slightly overdue as her anniversary fell while she was pregnant and therefore she couldn’t have had it then.

Settling her back in her carrier, now our attention turned to her sons. Humphrey went first and was examined all over. He & his tackle were thoroughly examined, and pronounced perfect. He weighed in at 995g so almost at a kilo! Go Humpty! Now was the bit where he needed to be brave and he was given his vaccine (minus leukaemia) , followed by the larger puncture wound created by the microchip implant. He didn’t make much fuss and was given a kiss and a hug and returned to the carrier.

Next up, kitten 2 (as the vet records show) was checked over. He has a slight conjunctivitis in one eye which we will bathe with salt solution to get rid of that. He weighed  990g. Next he received his vaccine, then microchip, snuggled for being brave (small yell only) and returned to the box.

Kitten 3 was also perfect, weighed 805g, but was not so brave about his jab or chip. He bled for a minute of two so had longer hugs while I pressed the wound with a gauze pad.

Last but not least kitten 4 as perfect as his brothers weighed in at exactly 900g and made the most fuss about the vaccine and chip. Again some bleeding which soon was stopped while we snuggled and the. we were free to pay & go.

I’d not fed them before we left so they were very ready indeed to eat when we got back. Then, having filled those bellies, they bypassed the toys and all retired to sleep off their adventure. 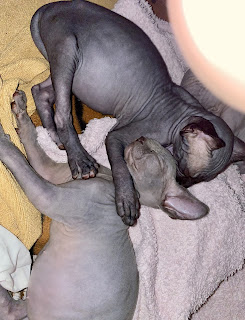 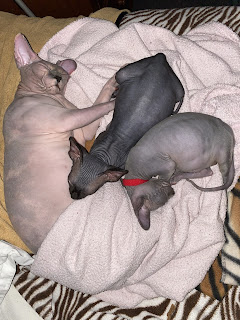 They may be a little subdued for a day or so having had their vaccines, and just like when we have a jab, the injection & implant site will be a little tender but they will perk right up and be right as rain in a day or so.

As I’ve been writing, the lads have had another feed & are currently playing with their favourite box, and a selection of balls!

Regarding my choosing to withhold the leukaemia element of the vaccine: As a breeder, because there have been reports of kittens having severe reactions to this vaccine which can sometimes lead to death I choose not to take the risk with my kittens. However, having the vaccine is a matter of choice. When they leave us to go on to their new family, they will be indoor animals, so it’s very unlikely that they will encounter the virus. However, should their new family wish for their kitten to receive this part of the vaccine as early as possible, it is important to know that it can be administered independently by their own vet at any time.

The vaccine is re-given every three years, so, if new families decide to wait until their annual booster is due when the kitten has reached 12 months of age the vet can administer it then.

I’ve been hunting high & low at home while the boys slept for my microchip scanner. I seem to have lost it. I did see it when Prune was pregnant and I remember thinking then that I’ll need to charge it up soon, but now I don’t know where it is. Do you ever go round and round relooking in places that you’ve already looked in two or three times already? Well, that’s been me today. I’ve also been looking in places it’s very unlikely to be, but, 3 hours of looking while I tidied and cleaned, it is unfound. I feel frustrated and annoyed that I cannot think where I’ve stashed it.