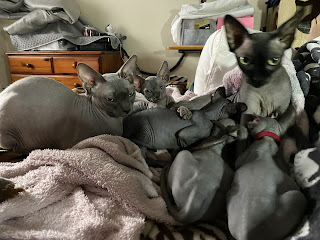 Piles of cats (yes Pru is being mugged for milk!)

Another viewing day dawned on Saturday at the Naked Sphynx Cat Hampshire cattery however, due to Covid concerns with a possible Covid contact in the household of this new family, despite negative tests we agreed that it was sensible to call off doing an in person viewing and so we resorted to getting by a video call viewing instead.

Even that looked a bit wonky at first but a few internet tweaks and with a cup of coffee in hand we eventually managed to see & hear each other well. The kittens did us proud running around & displaying all of their developing talents for hide n seek, ball dribbling, mouse wrangling, using the lounge as an assault course & of course wrestling. One attempted a long jump at height but didn’t make it, splatting onto the floor. I suspect he had jumped from that chair arm to that table previously successfully but doesn’t realise the table is on wheels and gets moved. Either that or he was testing himself for power to make said jump . He will soon be doing that - and more - with ease. Plus he was fine after the splat! What was amusing was one particular sassy kitten clearly took ownership of the favoured cardboard box having sussed out that he who is up top gets to control who goes in & who comes out of the doors! Having showed his dominance he soon laid in classic Simba in Lion king pose, lord of his domain. What made me smile a bit later was that 2 kittens later fell asleep inside the box, it’s sellotaped roof is beginning to sag (probably as a result of adult cats also joining in play, and using the aforementioned siege position atop the box to their own advantage). As the kittens slumbered inside Prune came from another room obviously having decided she wanting a nap but first she needed to account for the safety of all of her kittens & had noticed they were not all there in the usual snoozing place (at heat mat central) . She was looking for them around the edges of the room as if to find them and round them up while warbling softly as she searched. I like to think that she was grumbling about them being missing when she has far better things to be doing with her time but was cleverly disguising her annoyance with her sing song tone!

Finally, the question had to be posed “ well Clair, which is it to be Red Collar kitty or Purple Collar Kitty?”.

Panic struck for a second then Clair says “It has to be the king of the cardboard box” and at that very moment Red Collar Kitty became Basil!

Now…here’s a little add on detail…  last weekend Clair’s daughter had voiced a liking, having watched videos, for the green collared kitty but, not wanting to sway any decisions knowing viewings were up coming I had not revealed which colour collar he had become after having his bath on Wednesday afternoon. Turns out that Rose was right as Red Collar kitty had indeed previously been Green! Ta-dah!

After more chat, Clair said farewell for now & having ended our call, I quickly contacted my 4th & final new family to let them know who was the kitten that I could now offer to them.

What if I told you then that the response I soon received was “Yippee, we’d picked him out from the videos as being our preference”? D’you know, I absolutely love it when things like this happen. Sometimes these things really are written in the stars.

And so ladies & gentlemen of internet land I give you our final line up who now all have their names … drum roll please ….

Black kitten is Humphrey & he belongs to Sarah & will remain on active in her cattery to sure future generations in a couple of years time.

Red Collar kitty is Basil & he belongs to Clair & her family.

Sci-Fi movie buffs though one or two amount them may be, I am thrilled that this fabulous cohort of new families found us & that they have been so open with me as we’ve got to know each other over a few weeks.  It’s so important that our babies go to the best families & these lads simply couldn’t have asked for lovelier new families to be placed with. Thank you all for choosing Naked Sphynx Cat Hampshire !