A day of play

I’ve noticed over the last couple of weeks Prune increasing her provision of (toy) mice as she calls softly to her sons. I delight in the instinct that somehow informed her that, while she has NEVER seen a rodent in her life, she somehow recognises these toys (of various material & size) as mice and that this is the natural prey species to start her kittens on. There are other creature toys (fish & birds) but always it’s mice she delivers to them. Having watched outdoor going mothers who must regularly hunt, bring indoors a live shrew or mouse and holding it down with a paw while her kittens learn to become little predators, that Prune is doing this for her litters is fascinating to me

Over the last 2/3 days when as asked for suckling time (i.e every time she stops and her tummy is visible) she is now beginning to refuse it or allowing for seconds before stopping them, she has obviously decided that it’s time they stopped milk feeding. She will get up to walk away or, fed up with the barrage of greedy muzzles has taken to lying tummy down rather than being able to relax into sleep on her side. To give her a break, and help form a barrier for her I’ve popped on a long t-shirt. She wasn’t keen to be dressed (she dislikes any form of restraint hold (as it needed to dress her) as she is a very timid girl and sees danger in being caught (such as to be put in her carrier to go out to vet or heart scanning, get a bath, be giving worming meds etc), but I hope that she realises now that I was attempting to help her. It doesn’t stop them totally as you’ll see in the images below, but makes it harder and hopefully starts to encourage them to take the next step to independence. Well, that’s the plan.

In one image you’ll see Prune’s posture looks decidedly uncomfortable, as if she is biting her lip and counting to 10 before walking away - which she did! And yes in another she does look oddly headless! I know they will still suckle a bit until they leave, I’m just trying to give mum a break! 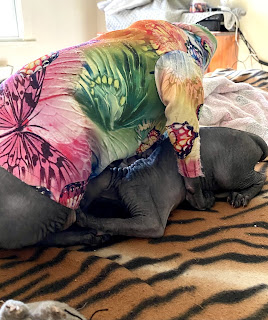 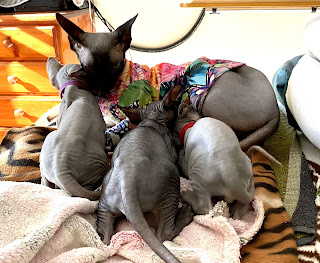 The adults and kittens were all worked at the weekend (the kittens are currently wormed at specified intervals whereas the adults are on a 3 monthly treatment) and, I’m not sure if it’s this, the effect of the jabs having hit them or if they are stealing & filling up on the adults Orijen dry food, there is a lot less Natures Menu being eaten than before. The litter trays are fine but I did find a little puddle of vomit last night suggesting that one of them (& so probably all of them) are feeling a bit off (or had gorged on the unfamiliar dry food). I’ll give it a day or two more and see if I can catch them eating the dry food as an alternative (when the adults get their timed/auto dispensed portions). If things don’t alter back to their previous levels of gluttony I will visit the vet. I’m keeping a close eye on tummies, fluid intake and general appearance, and if their appetites are still as poor tomorrow I’ll need to weigh them too. Another source of change to them will be that mum was wormed & had her vaccination the same day they did and so something may be crossing the milk barrier that they are not used to.

As you’ll see in the video taken today for their new families to see their new pets daily lives, despite being off their food a bit, they are still engaged and active, either in play together or up to something else alone. Play involves engrossed life skills (such as you’ll see in the film, learning patience in stalking their prey, or in their laying in wait (inside the box) for a passing brother/aunt they can hook. When playing as a pair or group it’s either dashing around chasing each other - climbing, jumping and building strength, agility & ability or they wrestle.