A busy few days doing not a lot!

The cats n kittens of Naked Sphynx Cat Hampshire have been  busy these last few days, though mostly it’s been in filling & refilling their bellies & playing.

One of our lovely new families has a daughter called Rose who commented that “Basil is always eating” and she wanted pictures of his actual face. Always keen to oblige any requests, I fulfilled her wishes right away with a short video clip. However, right at that precise moment the chaps  were in full breakfast request mode & increasingly frustrated with me for the delay. First, there was no food in the actual kitchen, so they all ran after me to the hallway cupboard , promptly charging inside as I hauled out a carton of 4 boxes. Since they’d now all gone in and under the shelving I knew I’d not got a hope in hell of rounding them up and reclosing the door, so I left it open & returned to the kitchen, whereupon I’d lost Humphrey who must have stayed in the cupboard to explore, then stopped off to relieve himself n the way back. So, when I then began to video a short cli it was very much as case of  “hurry up, and stop faffing just open the pouches” .

Im fully programmed to obey a demanding kitten, so promptly dispensed breakfast, standing guard as always to ensure that they get to eat it rather than the ganets, (oops I mean girls!). Humphrey had by now shown up and all four tucked in. Just for fun, I made Rose another video clip which by now featured my two dainty eaters Basil & Vincent (the harvesters Grogu & Humphrey having departed to playland). They might be dainty eaters, but they had very messy eating habits with food falling from their mouths. Chew it boys!

Daughters are pretty awesome (if cheeky!) and there is a daughter in one of my other new families too, this one named Willow. She is busy on a project of making a memory scrapbook of Grogu’s little life collecting video & photos right from his arrival into the world. It’s heartwarming & fabulous just how much these handsome boys are loved by all of their new families already.

Last night, the cats big & small all had their baths. It’s quite a mission doing 7 but as I’d had to cut the kittens claws a few days before (my legs were getting torn up a bit) that part was not needed for them again quite yet. Additionally, as I can do the little lads baths in the kitchen sink my back is able to cope a little better! Unless they somehow get themselves into any big mess, this was the last but one bath I will be giving these chaps too! Yikes, where is the time going???

The gents all behaved very well - not too wriggly. I’ve got a good routine going, filling a large bowl and the sink itself,  I can wet, then soap up using the draining board if necessary to ensure I can massage shampoo into every litter nook and cranny, then they go back in to the sink to rinse off most of the soap before receiving a final rinse in clean water to ensure no reside remains. I’m using Johnson’s baby shampoo (other brands are available) so it’s unlikely to irritate, but better to be safe. Next they are snugged up into a towel to dry before being made in a dry one into a tasty kitten burrito ready for the ear cleansing ritual to begin. Finally, though claws were already clipped, a baby wipe was is used to make sure all the little folds and creases under the claw sheath were free of clogged up oils that can’t be done easily in the bath.

Next it was the turn of the girls, but they had already cottoned onto this fact. Now, I’m used to having to capture & wrangle Noodle & Prune, knowing all of their hiding places as they try to outsmart me. By now the chaps were either snoozing or playing & as I passed by the lounge I stoped to watch as two kittens played I spy in the cardboard box fort. Wait, what’s that???  Did I just spot the glint of large eye back there lurking in the darkness beyond the fort doorway? Reaching my arm in I found Prune who I then had to skilfully manoeuvre to extricate. Not easy but I won. The box was still heavy though! Oh, now I wonder why?

I gave Prune her clean up. I use my wet room for the adults, sitting on the floor is much easier on my back than leaning over a bath trying to keep a hold of slippery cats (even with exfoliating gloves on they can be difficult to keep a hold of!) . Shampoo, rinse, towel burrito, nail cleanse and claw clipping then she was set free. Now for the next one… who would I capture first… silly Noodle, she has remained in the box, obviously not realising I had worked out it’s weight could only be her. The only mystery was how she got her big ol’ bottom in through the door in the first place! I reached in again. This extraction was harder than catfish tickling, but I got her and we began the process again.. Noodle used to grudgingly accept a wash but as she’s aged, and actually since the 4 month hiatus in bathing caused by my ankle break last year, she has been much much less accommodating unfortunately. Her nails are always frightful. Prune & Floozy keep theirs pretty clean but my goodness the congealed oils this girl accumulates deep in her nail beds and folds is unbelievable! Finally, her bath done, it was the easy capture of Floozy as she’s far too nosey ever to hide away! I do make the process as “pleasant” as possible treats (known here as kisses, I’ll tell you about that at some time!) come after a bath, and find it far batter to do the entire routine as one rather than bath one day, ears another, claws another still. Claw clipping some people do when their cats are sleeping but cleaning would defo rouse them (especially Madame Noodle who needs a full on spa level pedicure).

Vincent rather likes the washing machine and spends a lot of time being hypnotised by it. Just as well as there were now four new loads to go through. 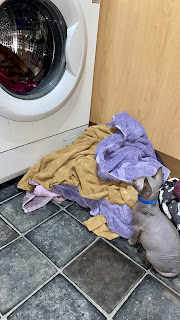 I have a guest bathroom (sounds posh, but isn’t!) which is where I dry my laundry, in winter it’s always really toasty in there and its all hidden away (who has guests nowadays?) The door is always kept closed so, what I want to know, when I went to hang towels this morning, is how and when exactly this happened ? 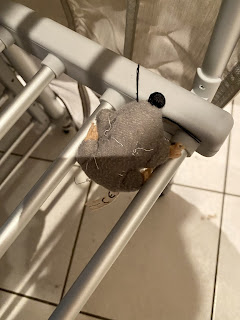 I know Prune is keen (yes she is still wondering about with toy mice!) but seriously, this is ridiculous!
Noodle says I don’t feature her shots nearly enough, so here is a couple of her… you won’t be surprised to see someone else getting in on the act though! 🤣🤣🤣 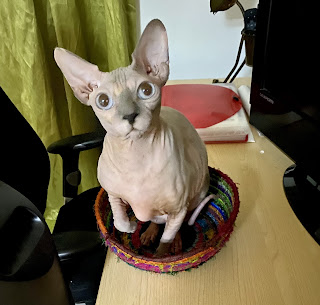 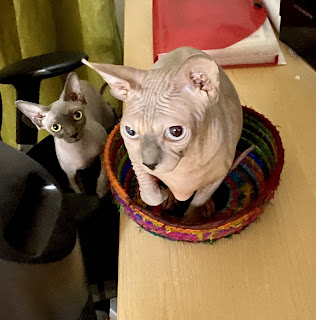