Today, I was blissfully aware of some energetic play going on in the lounge. I took 5 minutes to scroll on my phone (as you do!) when the clattering noise was coming down the hall.

I got up, and around the doorway came Humphrey, completely trapped inside his favourite toy!

The bottom section containing the batteries, vibrating gizmo and tweety noise was missing. Humphrey was essentially caged, like a cute Hanibal Lector!

His head was all the way through to the other side. While his chest, shoulders, arms and tummy were inside the cage. Tweety-pie itself was poked out squashed in the top against the roof. Poor Humphrey had push limped with what of his front legs could reach the floor and his back legs to find help. Bless his poor heart. God though, he’s so laid back. Not a whimper to tell me he was in distress. Maybe he wasn’t and thought it was a bit of a lark but I thought not and quickly picked him up. I took him to the kitchen and on the draining board I tried to ease his elbows in to the same part his chest and tummy were in, thinking maybe that would release him, but I had only one set of hands and as his head was also stuck that would have required another person to try to force open a wider space so he could come out backwards. There was no way either that he could go forward. Thinking fast, how do I fix this? I contemplated washing up liquid and water but did he need the stress of a bath while trapped? Should I call my son to come? No I didn’t want Humpty to wait the 5-10 minutes more that would take. My jewellery making tools were on the kitchen table with wire snips inside. Would they cut through the plastic bars of tweety-pie’s cage?

Turns out (thank goodness) they do.

Snip. Snip. Snip. I went around until tweety-pie and his would-be captor were freed. Lifting away the cut open cage I was then able to extract Humphrey, who no longer has a favourite toy. 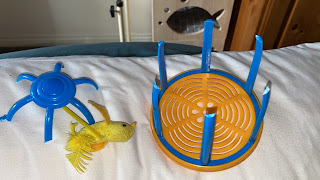 Just a warning about this toy, in case you have one!