I’ve just completed the last feed of the day - it’s getting on for midnight (it will be by the time I’ve written this post) and I’ve just weighed the kittens again. This time I took photos to add to this page showing you !

Mum was keen to know too so came to oversee procedures… 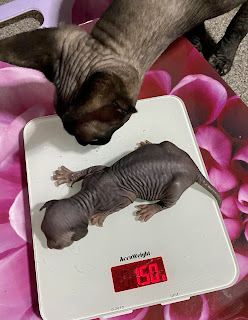 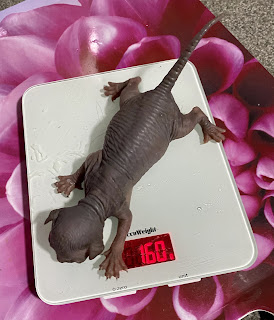 Next up was the blue girl who was 121g just 2 nights ago. 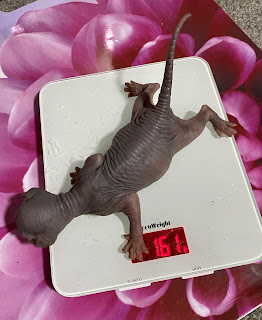 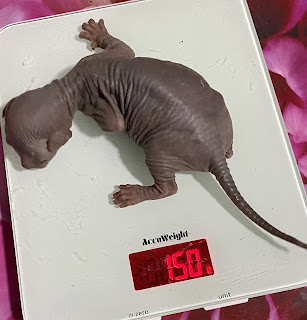 These are tremendous gains showing how well fed they are - mums milk is keeping them full & I’m simply backing this up at this point. It might be that her milk supply though evidently plentiful now will bottom out leaving a bigger gap for me to plug but for now she is doing enormously well.

She settled into the new digs pretty well. She did bring one kitten onto the bed during the night but I put it right back and she settled back down with them. She does take regular breaks but spends only short bursts on the bed because instinct to check on her charges wins out, particularly if they are moving about snd whimpering.

I was proved so wrong today as it’s still just the two kittens with their eyes opening. It’s very difficult to show this however as their eyes will shy away from the brightness of the camera light source. It might be visible in video I took earlier which I haven’t yet uploaded but will after I’ve finished writing and will add on later. I took two lovely bits of film today minutes apart.

Sunday tomorrow- a day of rest - NOT. I’ve got to get my finger out around my home as been very lazy this week enjoying the babies! I return to grandma’s babysitting duty next week and it’s half term! Have a lovely Sunday!