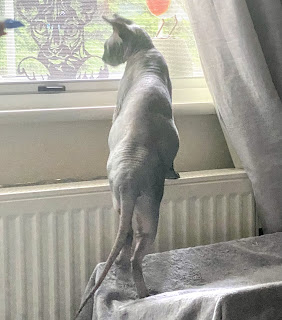 Look at the swell of this tummy as a heavily pregnant Prune takes a peek out of the window! Her natural svelte shape is still very evident despite the tight balloon of her tummy. In this image she is stood on top of the kittening box I’ve set up for her on top of which I’ve placed the storage box that the kittening box folds down into. Over it I’ve draped a throw to make the kittening box into a cosy little cubby den. While it is all standing ready for her & her new brood, for now it’s providing a great staging area from which Prune has become a “peeper”! Yes, she Peeps!
Meanwhile, when not engaged in Peeping I’ve noticed that at the same time as the skin of her ladybits & anal area have again become dark black (as happened in previous pregnancy) she’s also spending an inordinate amount of time grooming said areas.
I’m guessing that the colour & shape change she experiences in her private areas might also come with a change in sensation too which might be at least partly responsible for driving her to want to groom those areas more, or perhaps the attention she is paying to cleansing is simply due to an influx of a maternal brain chemicals at this late stage to ensure that when Labour begins the areas are hygienic. She is very sweetly comical in a way though as clearly she is finding positioning herself & reaching around her belly to undertake her work more & more challenging. In the picture below, she had crept under a blanket I’d covered myself with feeling a little chilly. She is using my lower legs and ankles as props! 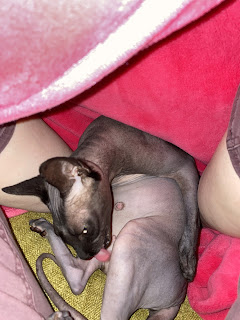 The clock is ticking…..We have around 10 - days to go so I’m expecting to be able to see & feel little arms, legs, heads below her skin at any moment. I do try to place my hands at her abdomen during her cuddles to see if I feel a kick or a repositioning baby. No luck yet though. Space inside will be at a premium as the kittens begin to reach the peak of their pre-birth size (around 65-90g each). I’ll see a change in her tummy at some point soon as things get ready for Labour. She’s not overly huge & historically as she’s had litters of 5 & of 4, I don’t expect a huge litter, but am getting excited to be meeting them very soon. It’s like that Christmas is coming feeling you have inside as a child. The difference here being that I don’t know the exact day this particular‘Christmas’ will be!
Posted by Naked Sphynx Cat Hampshire
Email ThisBlogThis!Share to TwitterShare to FacebookShare to Pinterest
Newer Post Older Post Home