Day 1 in the little kitten house… 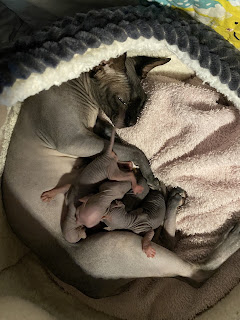 Oh boy Prune is so unsettled. During the night she kept bringing a single kitten up & onto my bed and I kept waking to it’s squeaks. I put it back, resettled her and sometime later she was back!

It’s normal for a cat to move their babies soon after birthing so maybe this is what she was up to (though never done it before) but I’m inclined to think that really she just wanted to be in her usual spot in a heat mat! There is a heat pad in the kittening box but it’s under thick vet-bed fabric so that kittens are not able to get too hot (and be unable to move away).

I’ve done a lot of feeding. Yesterday evening they each guzzled 2.5 (& even in one case an entire 3ml emptying the syringe) on the first manual feed. And overnight during subsequent feeds they were each taking the full 3ml. Today I’ve upped the offering and they’ve been taking 4-5ml each time. Gannets! Great weights though. The heaviest tonight was 112g and the smallest 100! What’s a relief (no pun intended) is that when Ive toileted them since beginning to feed them the urine output is now more yellow than amber which was alarming.

I’ve brought a cat den into the kittening box this afternoon hoping that Pru will be more inclined to remain with her kittens (which she seems to have taken to,  but I’m also a bit afraid she could squash one when having got out wanting to settle back down. Not sure I’ll leave it in overnight

What’s so very sweet is Noodle sitting beside the den as if waiting her turn with the babies. She’s desperate to help. She really is a fabulous Aunty (and was a great mum). 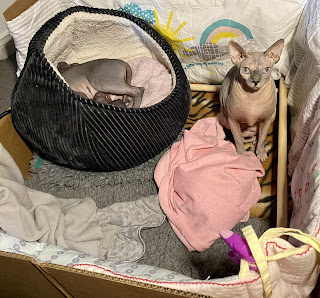