Eyes open but not wide (awake)

This morning the first born (blue girl) looked a bit different. Yay! Both of her eyes were unsealed nearly all the way across, with thin slits revealing the first sighting of the shiny dark matter behind those delicate eyelids. By this evening her eyes were almost fully opened showing the large glassy black orbs of her eyes. Like human babies, the eyes are dark at birth gaining their permanent colouring over the next few weeks. Also like a human baby, she will not have 20/20 vision at first, just very very blurred short distance, but can see light and discern varying shades of grey.

It’s now 11:30pm, and I’ve just given them all feeds & noted as I did that one of the boys too now has both of his eyes partially unsealed so he’s not far behind.  I’ve little doubt that by close of play tomorrow all 4 will have opened eyes.

Meanwhile their ears all appear to still be sealed but the small flaps are all not loose. Soon, as they feed the muscles will be stronger & working so hard that they’ll appear to be “flapping “ the ears back and forth. Over the weeks to come those tiny downward pointing ears will stand to attention & will grow to be so much larger which is one of the most visual traits of the breed (other than being hairless obviously!). That’s an enormous change & yet  it’s so gradual it’s hard to say when the change actually comes about.

Today, I decided to re-house them. While Prunella was very happy with the cat bed dome, there is risk that a kitten can be laid down upon. They do squeak like crazy to tell her they are in trouble but I’m too concerned that something terrible might happen to one, particularly if I am out to risk leaving things as they were. To begin the move I got out & set up our smaller pet crate. In its base Ive set her adored heated mat, which has several layers of protective covering preventing any risk of their delicate skin becoming damaged. There is vet bedding on the remaining floor area and I’ve “wallpapered” the crate out inside using padded cot bumpers (the kind that used to be used on babies cots - but that are now not recommended !) . Over the top and three sides is a heavy throw blanket making a dim cosy and draft free environment for them. Prune is not happy about the removal of the cat den and is not as settled again however, she has raised her previous 2 litters in this crate so hopefully she’ll hopefully remember & in that familiarity will relax.

The largest door is open so that mum can come & go and for now a rolled up blanket is enough to keep a crawling kitten from inadvertently tumbling out & escaping (which had happened with the cat den and was another reason for the relocation!). I’ll get some cardboard and create a higher barrier over the weekend to be extra safe. Here they are in their new digs: 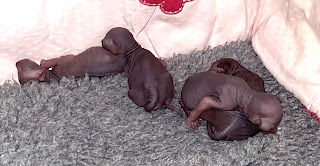 As you can see, they’re zonked in sleep. Small neonatal kittens do a lot this making photos all a bit samey in these early weeks, but they will make up for this in the weeks to come after they’ve found their feet, ventured out of their nest & learned the layout of their birth home.  The kittens look very dark in this image. It is very dark where they are housed and so this was a fill in flash & then I edited the light balance further to provide a clearer image.