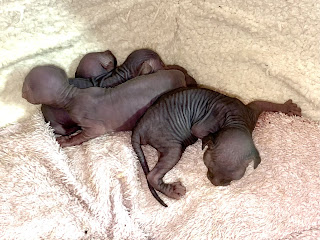 A pretty chilled day - mum & her kittens are well settled together now, providing the enclosed feeling of the dome obviously has aided Prune to relax - I’ve had to go to the aid of a squealing baby once or twice as she repositioned and one rolled into a difficult position, a quick helping hand puts everyone to rights against. Mostly it’s the “conversational” squeaks I hear now as they wriggle to settle themselves just before contented sleep rather than increasingly desperate hunger or failure to latch on that was making Prune feel so agitated on day 0. I don’t know if to Prune each squeak is individual or sounds different to another - nature tells us how sensitive a parents ears when you know that in the vast colonies of penguins a single chick can be picked out.

Everything is then much the same, I’m feeding intermittently in supporting Prune to healthily produce milk for her brood. They are delighted & very eager to take the formula milk, guzzling until their tummies are full barrels. They don’t get as full during maternal feeding, & they also must work much harder to acquire it too. As they knead & suckle this stimulates Prune tolet down milk & the more this occurs the more she should produce. I’ve always noted that the smaller uppermost teats are less used while the larger lower ones are favoured & fought for - pushing & shoving for survival, in their blindness, instinct to get & retain position of those pole positions is key. I believe those lower teats give more milk more easily and for longer, hence their popularity however, if a sibling has been asleep and wakes to push his way in, he or she will be im for a shock to find the larder is bare!!

Noodle is continuing to provide security detail & baby minding duties which is great since I was debilitated today.

Photos of early life is mostly bundles of kittens - with or without mum… this pose is a favourite Superman-like taking possession of that spot. I love the “hands” making an Impression  into mums belly! 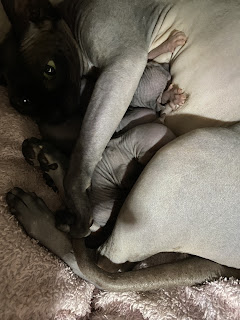