I was back in the saddle today providing a bit of childcare because last week my daughter in law’s maternity leave ended.I’ve not done any proper child care since before lock down #1 began, though did do a couple of afternoons during subsequent lockdowns when childminders/nursery was closed,  after my ankle break had healed enough & while she was pregnant and trying her best to work from home all with a demanding toddler vying for attention. Being immune suppressed, the only way I could provide the care was if they close the usually welcoming door on all other family members. Anyhoo, lots of time has passed and I’m hoping my 4 (soon to be 5) jabs and careful life will be enough to protect me going forward. They’re my greatest joy (other than the cats!!) but my biggest kryptonite. So, it being half term as I took the reigns this morning I had both children to entertain/care for - nothing like being in at the deep end! Actually they were wonderful as always! ❤️

I began by waking extra early to make sure the kittens were “full of tummy” before I left & since I forgot to weigh them last night I also did this this morning too. They weigh in results are:

All kittens have fully open eyes now, and as I pick them up I can definitely feel how solid they are becoming as they “flesh out”. At 9 days today they still sleep most of the time between each feeding & will cuddle up with mum searching out a teat then dozing off. Either then or if mum decides she will take a little “me time” they’ll bundle up in a heap all together or else in pairs. It’s rare to see a kitten sleeping on its own. If they wake and are alone they yell out, and seek their litter mates or mum will respond and go to them. I love watching my beautiful Prune as she mothers them. And I love that Noodle is happy to assist. She’s even I see taken in her favourite toy to lend them. You’ll see it in the photo back right corner.

As each day goes by these kittens so fragile just a week ago just skin , vital organs & bone, are gaining weight and building up muscle. Once they leave their crawling behind and find their feet though their energy levels will start to increase & they’ll be awake for longer periods. Eventually Prune will begin to entice them to step out of the nest, a sign she is ready to begin to litter train & wean them. Once they lose the early natural cautiousness they’ll be hard to contain, all part of kitten rearing fun. I love it 🥰!

Feeding is going so well that each time I make up the supplement feeds I find all four kittens with filled tummies. Rather than over feed them I’m going to dial my efforts back for 12-24 hours to see how they all cope (mum & babies). It might well be that even if now she can keep them fed & happy, as their demand continues to grow, her milk supplies may not be able to keep pace, in which case if I do stop having formula right now I’ll be able to restart them at any time. I’d just like to give her the opportunity. Their weights and their appearance will soon let me know if I need to start feeding again tomorrow.

Have I mentioned that  I’m keeping the blue female from this litter for myself? Keeping a kitten from one of my litters is something I have always planned to do & now that there is a blue girl seems the perfect opportunity. I’ve been thinking about possible names. Momentarily I considered “Jubilee” this being the Platinum Jubilee year & the event itself so almost upon us. However, I dismissed it quickly - I’d imagine though that there will be a fair number of new cats and dogs this year bearing that name though! I do have a name idea list … on it is Cossette/Chossette (little thing)  as well as Rayzin, Elodie (one I really like though it’s meaning , foreign riches is a bit obscure), there’s also Thema (meaning Queen). But as I thought more & more I think I may have thought of one that sits really well for us.

Look, I’m not food nuts I promise despite the seemingly food oriented names of all of my cats contradicting this! I have Noodle - but she gained her name not from food but just from being, well,  Nood. A sweet tongue in cheek play on the characteristic nakedness of the breed. Then I have Prune - or to be precise her full name is Prunella Prudence ( The Prudence was giving echo to my pinky past & the punk song “Dear Prudence” by Siouxie & The Banshees. Prunella was put in preceding it because I thought they sounded so good together. So what is the name I think I may have for the new girl? What food is she likely to be? Well, I’ve grown fond of calling her Plum. Not because I’ve a great love of fruit. I very much don’t.  In fact dislike Prunes too (or indeed any dried fruit) but I think Plum because she is Prune’s daughter. And whereas a Prune comes from a Plum being dried and so would mean Plum then Prune for us it would be in reverse, the Prune creating the Plum. I like it because it connects them mother & daughter even if it’s topsey-turvy! I’ve a while to decide so I’ll not decide 100% yet

I still very much love the name Floozy. And I was desperate to name my 3rd cat this. Indeed when I purchased a blue female kitten in 2020 (the year Prune was not mated) I gave her this name. Unfortunately though she had to go back to her breeder toward the end of last year due to her permanent digestive health issues & the need for her to have daily steroids. This medication made it impossible for her to become the breeding queen I had hoped she would have become for the first time this year (aged 2). I still very much love the name & I very much love & miss the cat. The association of the name to the cat I love & lost feels to recent and too raw & I just don’t feel ready for reusing it. Yet.

Here before I go is the proudly purring mumma - image taken this evening with her kittens suckling away…(with Aunty Noodle’s toy in the corner!) 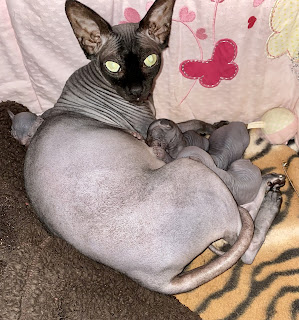