Though to look at these boys now sleeping soundly in a heap piled up their warmth against my forearm as I type, you wouldn’t think that only moments before they were at play. 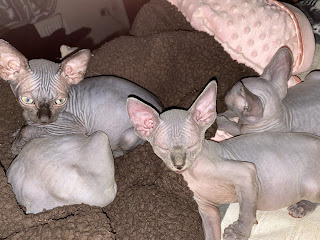 I was unwell during the night and was up and down so the boys were very disturbed and didn’t know that it wasn’t playtime. By 5:30am as I was almost ready to sleep, I looked over and heard the boys tucking into their first meal of the day. Bless Prune, she is still allowing her sons to suckle at will. She will get up and walk away when she has had enough but this litter I’ve not (yet) seen her laying like the Egyptian Sphinx white her tummy down to stop them gaining access. She is in heat too, the first since having them and so is a little unsettled herself. I’m so proud of this girl and her gentle ways.

I was allowed a small amount of sleep before the chaps demanded MEAT and so their wish was my command and off to the kitchen we did trot. I am so amused as those tiny legs run like the clappers so excited are they for food, eager to be first there. They further make me laugh when feeding them in different ways…if I give two bowls between the four they are at first head down to the nearest bowl that there’s room for their heads in. So eager that 3 heads are in one bowl while the one who didn’t fit moves along and has a whole bowl! I move one body along. As I stand guard (lest the adults think it’s a feast they are invited to) I watch as the food piles shrink. But so do the kittens and I then see various changes of who is at which bowl… the grass is not always greener, and having moved over , he now has no space at his original bowl! If I put 4 bowls and place 1 kitten at each, heads go down, but once again, after they’ve chomped enough to satisfy the immediate need to feed, they want to check what the other has and start sharing or shifting about. The important bit is that they all eat their fill, one by one wandering off to the litter trays, before, running amok in amongst the toys.

There is a clear favourite toy. A cardboard box that I taped closed and cut two doorways into. They like to ambush one another either with one springing out from inside or perhaps from the vantage point on the roof as one brother emerges. They also like to chase a ball. I have laminate flooring so the ball runs easily and makes a great sound. They enjoy tweety bird, a caged bird powered by a battery to jiggle and tweet! Mum has been bringing them mice. I adore this instinct she has to wean her children from her milk by providing mice. How does she recognise that a toy mouse represents what would in the natural world be perfect food for her kittens? I’ve watched moggie mums bring mice for their offspring and sit with it trapped while they learned how to deal with it, so what Prune does is totally natural, but as she has never seen a mouse or hunted her own food, the fact that insi ct drives her to feed them mice, even if they are toy ones, is incredible. I love watching a kitten then toy with the mouse it’s been given.

Having had playtime, they retire… now they’re mobile and have explored they soon abandoned the beds in the lounge having discovered the heat mats on my bed where the adults choose to go. Snuggling under a blanket on their own, sometimes sleeping in a pair or in a pile of all 4. A little grooming maybe and they soon nod off.

Sometimes during their slumber Prune might wake them. She’ll maternally decide (for some reason) that it’s time she groomed them. She’ll set about her task, but now less thoroughly than she did when they were small, usually concerned with just one or maybe two of them m. They immediately roll over offering their “bits’ and she will still toilet them. Then having woken one or two she will wander off and groom herself. However, now she has roused a kitten(s) still dozy but maybe awake enough to think of a belly the most roused will want to nurse. Making his way to mum and choosing his position he immediately begins his ecstatic purring which, if she roused two with her rasping tongue, will signal him to join his brother at the milk bar. If we are lucky, they’ll soon doze off again - maybe for a bit. But probably they’ll go off to play…

When they wake one by one in the mornings they’ll start to play. First it might be a nip of an ear or tail either that of a brother or one of the adults. It’s a case of any attention is good attention. They get better reactions from a brother of course and soon they fight, run up and down my bed leaping, wrestling and biting (sometimes my toes!) or if it’s later in the day then they come find where I am or go off to engage in play with the toys or if I even look like I’m walking toward the kitchen will run like crazy to tell me they’re really, awfully hungry.

They’ve a big week ahead now that they’re 7 weeks old. Their first vet visit is on Thursday when they will be exactly 8 weeks. So, Wednesday will be a bath day, their skin, ears and claws cleaned & trimmed.

Thursday they’ll be health checked, then vaccinated and have their chips implanted. The puncture wound made takes a few days to heal and this is why I have them implanted at the 8 weeks rather than the 12 week appointment as I want them totally healed before they go to their new families thus reducing any possible chance for infection. It’s unlikely I know, but I need to be absolutely certain.

They may be a bit out of sorts for a day or two after the vaccinations but soon perk up. Just as well as the first viewings are happening on Friday and Saturday. It’s thrilling to be introducing them to new families who come ready to pour their love upon them and for me seeing which kitten steals whose heart.

Humphrey, the black kitten was a “pre-order” as a dear friend who is also a breeder of good standing and whom I trust. She wanted a black boy of direct lineage to her original Sphynx called Charlie. Charlie was the stud used with Noodle but he is now retired and advancing in years. Prune is his daughter. So this grandson is reserved, but who will be chosen next?