I’ve started you off with a dose of cuteness on purpose! This is today’s portrait of my youngest grandchild, aged 10 whole days.

For a couple of days now, in the late afternoon I’ve been opening up the side of the pen to give the kittens a taste of freedom and begin mapping their domain. This time allows me to give their area a spruce up while they, having had their meal and the adults allowed back into the room, can all play together. With melting heart I  watch the group matriarch Noodle as she gets in touch with her inner kitten. She crouches low, her fight front paw raised, her bottom wiggles, quivering as she gets ready to pounce. It’s a pose I used to see often when she was just a kitten learning to hunt her prey.  Her prey now? Oh, a kitten of course! As she dashes forwards her playmate turns side on, his tail straight up, his back arched and his head angled so that his eyes appear as large as he can make them, all in an effort to appear larger and more terrifying (as if!) It’s cute to watch as with each new game, the kittens are discovering that they can do more & more, they’ve learned to use their sharp claws to climb, to inch their way down and, to jump. After play, they’ve headed for their heat mat and sleep at which point I close up the pen again.

As I prepared for bed earlier (at around 1am) I was reading an online newspaper when I became aware that Prune was doing her sing-song voice, the one reserved only for speaking to her kittens. YES KITTENS! Entering my bedroom and, quickly making it onto my bed were the two adventurers. Having  climbed up, and exploring a while they very soon fell fast asleep. One chose my tummy to curl up on (well it is big, warm & soft!) but this adorably rendered me captive, while the other chose the heat mats where Noodle, Prune & Floozy catch their ZZZZ’s . No one though could scoooch under the blankets since a kitten now slept soundly on them. It seems that they too are opposed to waking a sleeping kitten. What are we to do, we are rendered utterly helpless by these tiny bed pinchers!

I just hope that these boys can get down and reach their litter tray when they wake needing a tinkle!

Tomorrow, morning the pen will be dismantled & put away. The kittens have most definitely decided that its served it’s purpose & that it’s time for the adult girls (including me!) to share their sacred spaces. 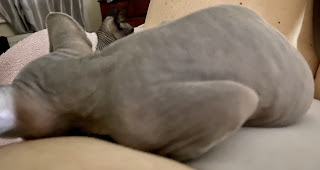