Yes, defo this could be a reference to the weather this summer of 2021 for sure, but I’m actually referring to the stunning lack of progress I’ve made in interesting these babies in lapping from a dish!

I reckon they just really like the cuddles and close contact involved in teat feeding. I certainly like the purrs, but for them the fact that it’s fast, easy & fills them up quickly is preferable to the unfamiliarity of needing to lap which is difficult to master & takes too long. Today in fact one little chap was so determined to continue suckling as I used the teat with milk being dripped flow it to guide him down toward the milk in the dish that he got hold of the teat and refused to let go. I allowed him to sickly until the 30ml was gone, but he wanted more and kept sucking and biting so hard that he pulled it off of the syringe tip completely. I then had to gently ease it out of his mouth because despite no milk he was still unwilling to let it go! I don’t know if this is his way of underlining it as his preference… tomorrow I’m going to offer some meat for the first time.

Whether it’s meat or milk, a mixture of each or even milk soaked dry food, whatever is given to kittens as weaning gets underway it’s a messy the first week or so… they will have no respect for the walls of a dish and will happily wade through the deep puddle of milk or muddy squelch of their soupy feeds walking it onto every surface they can before mum or an Aunt swoops in only too eager to do the clean up of messy mouths, and mucky paws and will go on to wash the dishes too. My clean up crew will be pretty thorough! However, they’ll then shun the toileting work they’ve been so keen to undertake so what help I gain I also lose!

We’ve had some fun as they enjoy the extra room that’s afforded them in their new play space. My dear Grandson (3) came yesterday morning while his day old baby sister went to hospital to be hip scored. He helpfully filled almost every bit of floor in the pen with a cat toy. Afterwards, for the rest of the morning I had to call him  “medium Pud” (as opposed to small Pud, the black kitten). Medium Pud meowed a lot & was quite the cheekiest kitten I’ve ever reared! The actual kittens meanwhile have been exploring, and seen engaging in ever more play together. I hear various sounds as they learn to get about then the odd pig-squeal of indigence will ring out when the sharp teeth of an overzealous brother are too eagerly used. I love watching as they take turns in being the aggressor or victim who will conveniently roll onto his back only moments later to writhe and kick his back legs as he’s held in a head lock and his head, ears or neck are nipped! As personalities develop rapidly now, soon there will be a shift as certain kittens start to refuse to take on the victim role. I’ve seen 2 blue kittens coming to the fore as early leaders, while one of more hesitant to push boundaries. Pud, easily the largest kitten seems to be chilled out, not easily led into mischief!

When not practicing at hunting or the kill, these tiny predators have shown a good deal of interest in digging in the shallow gritty litter of their first litter tray. I’m always amazed at how these things don’t need to be taught them & they pretty much start to “do the deed” there instinctively.

Their new smaller shelter, which yesterday became known as the Kitten’s “shed” (Holden described it thus due to it being wooden I guess) has a flat top which has become a vantage point from which the on duty Aunty or mum can watch without being directly involved. Floozy though does still spend time inside the shed snuggled up with the kittens in mums absence. That said,  she is distracted from her kitten care work this weekend due to being in estrus, bless her heart.

An exhausted mum takes a nap! 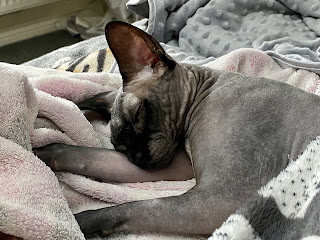 I get spotted as I appear overhead… interrupting some bundled play. It must be feeding time! 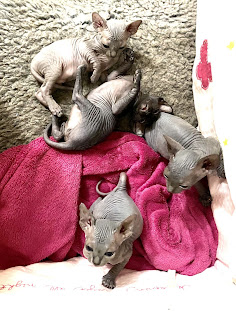