Hot on the heals of Prune giving birth, in the early hours of this morning our family was blessed with a new addition. Adelaine Belle Westwood was born at 4:40am weighing 7lb 12oz and has an impressive shock of dark hair. She is my second granddaughter, my 3rd grandchild and I believe completes the set. I have Tia who will be 16 later this month, Holden aged 3 and now Adelaine. 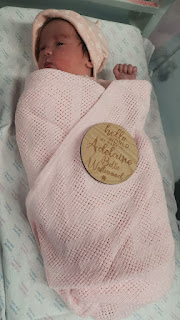 Meanwhile, it’s a busy week for the lads who had their first effort at taking their milk from a dish yesterday.  One blue kitten picked it up reasonably well right away raising my hopes while the others were decidedly unimpressed. It’s a juggle fending off the adult cats who would like to show them how to drink it while at the same time holding the dish aloft at kitten height while also tilting it to make it easier for them and with the fourth hand, guiding the kitten gently toward it. Because last night became the one in which I was called away I needed to revert back to the syringe & teat to be sure that they had had their milk quota and in good time as I dashed away overnight leaving mum in charge. I did check in a couple of times with my web cam.

Having dashed back this morning to feed them and scoop the poop (adults) I got back to the dish this afternoon. No one was interested with a “no ta, I don’t think much of that” it was an exodus leaving me to clean up the milky puddles.

This evening, the chaps have had a house move upgrading into their new apartment complex in which they have a shallow dish of water (to watch & learn as I’m sure the adults will decide the kittens water is far superior to than their own). Hopefully they’ll want to investigate the dish and practice lapping so the transition from suckling can happen organically. I’ve also placed inside a shallow litter tray and light gravelling of litter. Aunty Noo has already shown them how to dig in it but given its small/shallow  and I’ve only put a small amount of litter I’m hoping that for now there’ll be no practical demos in there. 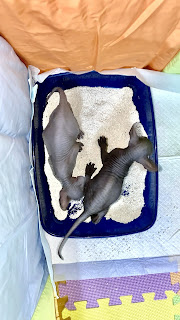 The move went comically actually as I had gone round as far as I could with the cot bumpers I now have (one outstanding still to arrive), but there was a long gap due to them having also one cot bumper which was still in the “nest” crate. I quickly put the boys into the pen along with blankets they’ve been using (so that it smelled familiar). I’d hoped the new and unfamiliar place, which my dear grandson had filled with toys this morning. The adult cats alerted to change were keen to be part of the process jumping in and out of the pen so I’d hoped they’d stay put while I dashed back into my bedroom to untie and grab the cot bumper however, by the time I’d returned, 2 naughty kittens (pretending to be looking for lost mittens?) were out in the room! Now they’re secure - or as much as they can be given that one seems keen to climb and scale the bumper as it’s it’s an assault course climbing wall assembled specifically for their physical development! They’ve yet to discover too they can burrow under. That can be our secret for now though right? 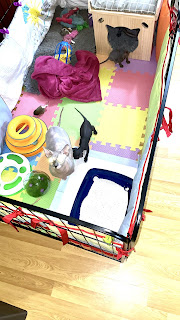 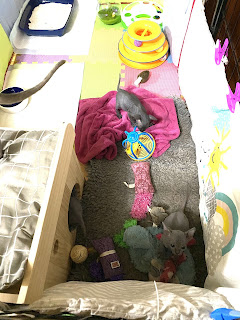 The crate is now collapsed down, (ready for next year?) & I can open my wardrobe again so after 4 weeks I can get a different outfit or two! They have a new cosy nest…(I’ve used the top layer of a 4 apartment cat condo) but what, or who is inside? 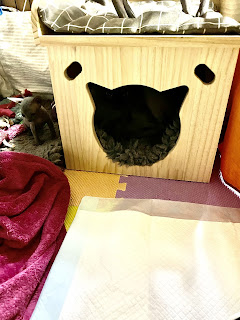 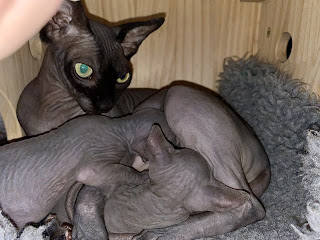