So, my last post was about my pretty scary Monday night into the wee hours of Tuesday morning... but my, how quickly things turn around... on Tuesday, supper time, almost 24 hours since the horror show of the previous night,  as I bottle fed the little lad I was also being mugged by the black girl who was still also wanting milk and had not yet successfully moved onto solid food.

I gave her a half feed of milk so that she was not so boisterously trying to do her little bro out of his meal, then I got back to feeding him while with my other hand (you know, the third one!)  put the sloppy pouched food onto my fingers and she began to suckle it hoovering it in. Finally she had got a taste for it. Again and again I covered my fingers. She began to bite in her haste to eat more of this delicious food, and each time I re-dipped I moved my hand toward the dish leading her forwards until at last she twigged and just went for it - ta-dah!

I then turned my full attention back to little boy blue, and since he had also started biting on the teat (a sure sign that sucking was receding and milk no longer suitable). He was interested but not enough to follow my fingers....so I filled his belly with milk.

Wednesday morning dawned. A busy day for me since I spend the day with my 18month old grandson, Holden. I was up early to feed the kittens and to clean litter trays (and on this particular day, surrounding furnishings and floors) then be off up the road.

Since the kittens were born I set up a security camera at home so I can check in and see what’s going on, and I also come back home periodically bringing Holden with me to see the ‘baby cats’ which he enjoys.

Though pushed for time that morning due to the sheer amount of cleaning required that particular morning I tried boy blue with the pouched food again and suddenly, by jove he got it/ Within a minute he too was eating side by side with his siblings!

The same occurred later on when I returned both times with Holden and they were so stuck in they took no notice at all as he took on the role of dinner lady and began to poke one kitten in the ear, saying “eyes” ! 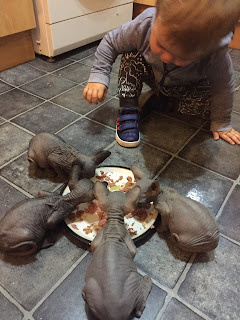 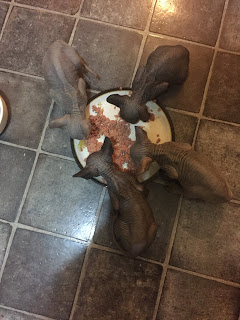 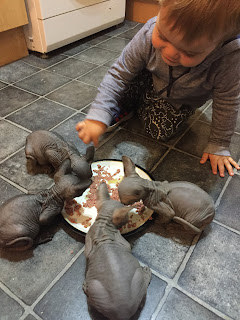 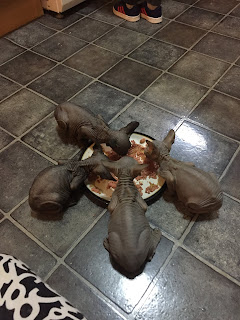 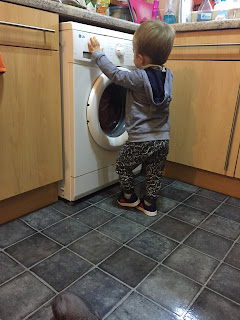