We have quite the hunter in our midst

I’ve noticed over the last few days that Mummy Prune has been bringing her ‘kills’ calling with her mouth stuffed with (toy) mouse to let her children know that it’s time to learn to get their own meals.

She obviously thinks that (a) she does, and (b) catching a toy mouse is sufficient. Last night on my bed were no less 6 different toy mice some that have ‘realistic’ sounds while others have stuffings impregnated with cat nip...

I’m guessing with them almost 12 weeks old mummy is keen for them to be independent... I’ve noted that there is a lot of comfort suckling that she does allow for a short time before either getting up (reluctantly) to move away or positioning herself on her front, then because they keep insisting with their burrowing little noses, she gets up and moves away.

Of the group, Karma seems the most impressed with killing mice, with Louis occasionally joining in. Lux and Elvi seem happiest chasing tails - anyone’s, even their own. 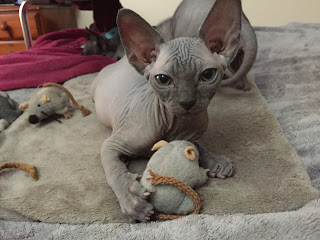 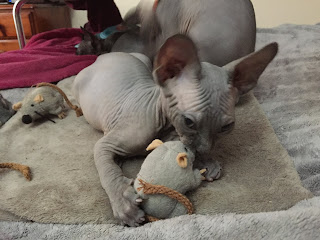