The best bed view & what a treat!

We had a very laid back Monday, with no real desperate need to do any chores or bother with anything very much... which was rather a luxury one way or another.

I say ‘we’ because this is how a certain clowder very dear to me, chose to spend their afternoon....I love,the images but (i) apologies to Prune for cutting her head off  (photographically speaking) & (ii) I’m sorry the image is a bit dark but, I had turned off flash because I wanted them all to remain peaceful like this! 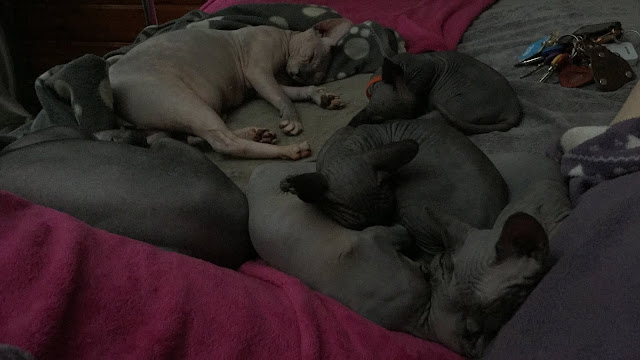 I was having a WhatsApp conversation at the time with Ley, Elvera’s new Mummy to be, and she said that she wished she had a bed full like this and it was the absolute best bed view she had ever seen. Can’t say I disagree either. The grey part seen in the centre is one of our PetNap heat pads, & is where they were at first centred, but as each was warmed, they rolled over in sleep to regulate their temperature so that it ended up as an island in a sea of cats. The Kindle (group of kittens) remain toasty in a bundle, sometimes even now, they look tangled like kitten spaghetti so that it takes my brain a second or two to work out which limbs go with which wrinkled face!

This evening, I decided to see what’s the youngsters made of a cat treat, though Elvira did miss qout by being elsewhere..... Noodle & Prune, as ever their ears like antenna had heard the giveaway sound of the treat tin (I can never open it quietly enough to surprise them with this little bit of love), however, the babies were none the wiser. I had selected two moist treat sticks - pack of 5 chicken liver - they have a high meat content - from supermarket brand Tesco* (*other makes are available).

My girls are trained to kiss me for a treat & Immediately I was showered in their cupboard love & affection. And as I broke tiny morsels I’d offer it to the kittens.... Lux was first, she sniffed... what is that new aroma... a tentative lick, yep, I like it, her delicate mouth took this delicacy & she returned eager for more. Meanwhile patient Louis, never one to be hurried has remained curled up. I pulled a tiny micro-chunk and bypassing Noodle eager for more,  I offered it to Louis. He sniffed, looked interested sniffed some more. Noodle was in his face anticipating, hopeful of getting her tongue to the prize. But I was ready for her, and Louis took his piece. Breaking off more for the adults, Lux was eager for more, and Karma had arrived, perhaps picking up an enticing aroma, she was now front and centre, paws on my get, eyes on the prize, nose up to the treat stick wrapper. She evidently needed no cautious sniff or taste. She was to ready to receive!

Prune who until she had given birth had point blank refused this treat preferring the crunch of dreamiest now absolutely loves it, though I’ve never given treats daily.

It’s worth mentioning a few cautions about treats:

Human food is in general not a suitable treat. Prune loves cheese I know, Noodle loves to beg a flake of cod. She would also want crackers, crisps and biscuits. Don’t make the mistake of feeding tit-bits from your plate, once learned, the smell of that particular meal is in the memory bank, but also, now any plate is worthy of investigation.

Be cruel to be kind - say no to tit-bits & avoid your cat begging.

My vets have a poster in each treatment room which show colourful images of what the meal equivalents are for the kind of human food tit-bits we feel so compelled to offer our dogs and cats...... a biscuit here, a sausage there.... a cube of cheese,  a burger,...etc... those treats can represent the calorific equivalent of a whole meal of pet food. It’s staggering. The end result of this affection we willingly bestow will be an overweight animal whose health is at risk. Tough love means no improprieties feeding & even when you give proper pet treats the amount you give must be carefully monitored.

Noodle put on loads of weight when she was spayed at the end of her second and very last pregnancy. I’d been feeding high calorie Kitten food through pregnancy to support her & her kittens, I continued with this while she fed her kitten. That was absolutely the right thing to do, however now she was spayed her body worked differently. Previously she had sprung back into shape almost immediately, but this time she remained large & soon she became quite the “wide load”, so much so, my never very keen to groom herself girl was so overweight she no longer could reach to see to her nether regions!

In the early spring of 2019  as we presented for her & Prune’s booster jabs, she weighed in at almost 4.5kg. It doesn’t sound a lot but, her weight pre-pregnancy throughout her adult life was over a kilo lighter, so she was now carrying a QUARTER of her body weight over again. That’s huge. And it’s dangerous.

I changed her food regime immediately. At first I weighed her food - now rather than continuing to free feed I began giving her the recommended daily amount split equally over 3 feed times. She would always finish it and then I would make her wait for the next daily portion... but, on a timed feeding schedule, just as she did with timed raw food, she would vomit after every meal, her tummy no matter how slow I dispensed she quite obviously is more suited to grazing.

So I needed to find a new way to help her lose this excess weight. The next step was to change her food to a much lower calorie one. First we used Royal Canin’s Satiety. Now I had to buy 2 microchip feeders if I was to manage my girls eating different foods. It’s never a good time for me to need to buy such expensive gizmos, however as always my ladies needs come before my own. I then needed 4 x D  sized batteries for each (begging the question why these were not made to be plugged in or at least have an internal rechargeable lithium battery.

Even if I had not got these now i would have needed to in future as Pru got to an age to breed when she would require months of high calorie food to sustain a pregnancy & feed her kittens.

Satiety did a grand job. Noodle wasn’t keen on it at first, and she knew she was missing out on tastier food Pru was having. Cruel to be kind, I stuck with it.

She lost weight, my friend Sarah who visited often and knew what I was doing noticed the difference in her mass.

I continued researching.  In an ideal world I would feed raw. I do think highly value it as a sound feeding regime for a kitten or cat. So when  I discovered Orijen & their Trim & Fit & Cat & Kitten, variety kibbles which are both based on Whole Prey feeding of raw meat I transitioned both girls to this.

Noodle has lost weight and is much less wide in her beam. She runs on her wheel as much as she did prior to her diet,food though it’s true to say she runs a good deal less than she did when she was an active cat & in heat. Then she would run for hours as the mating hormones ravaged her body. The running wheel definitely helped her cope with her mating frustrations.

I have digressed. The point was: 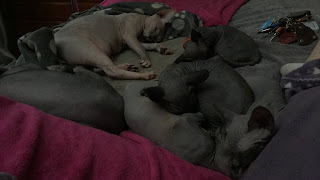