Prune’s kittens are growing so fast, something that always amazes, so much so that it feels like a distant memory that each was half a handful just 16 days ago. Visually since all have their eyes wide open increasing size appears the only real change, though each is at a slightly different stage of having their ears open, with the little lad bringing up the rear.

There are definite personalities emerging even now, with the biggest kitten seemingly the most wilful. I’m finding she is the most stubborn as I begin the first of their worming treatments.

For 3 days, directly after a feed the kittens must each swallow 0.5ml of Panacur worming syrup; a gloopy white cold soup that sadly is very distasteful to them. I realise of course that it is produced for treating both puppies and kittens but to my mind it is high time the manufacturer found a way to make it taste more appealing. Listen up Panacur!

Using a 1ml syringe I draw up for each a 0.5ml dose and then proceed to slowly drip the syrup in, all the while each kitten does it’s best to eject the unpalatable substance and not to allow me to gain access to their mouths with it again (and again).

For the two blue kittens that I give feeds to, I feel sure that they must wonder why I’m suddenly mistreating them, when normally I bring purr-inducing sustenance. For the two black kittens which I handle less, no matter how gentle and lovingly this treatment it is given, I feel sure they must think me as vile as that which I force on to and into them.

I do love their little faces and so I try hard single handedly to get a decent picture of each one but, since they are still only able to belly crawl, their faces are not at an angle I can see them well. Sleeping photos seem the best option when they are at least still. Mind you, the poor little girl who I disturbed taking this photo was quite startled by the camera flash. Oops! You can see too some white worming syrup has been transferred to a little blue rump! 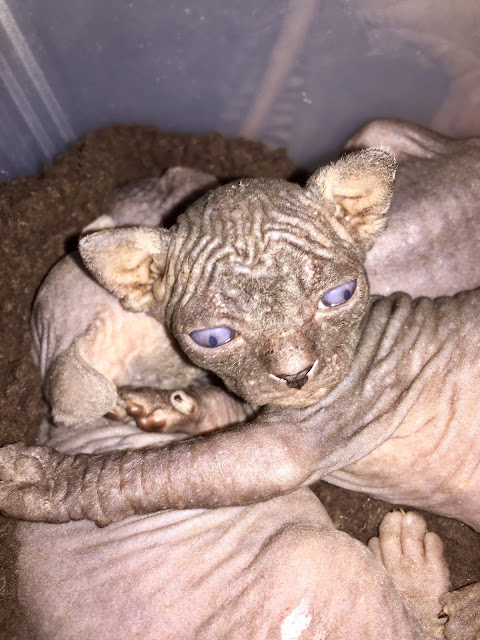