It is sad that today I lost one of the blue boys. He had been struggling from the start and had not gained weight nor managed to feed properly. Despite enormous effort, he finally gave up this afternoon.

It is fairly common to lose a kitten in this way - it is termed Fading Kitten Syndrome often affecting the “runt” of the litter who either does not manage to get a look in, or simply is significantly weaker and smaller.

Both boys and the blue girl were not feeding well - at first I had it down to the fact that the black girls were like bulldozers. I have been watching closely and so in the early hours of Thursday morning I decided that’s enough was enough and went t0 the kitchen to make formula and so to hand feed them, hoping that with some nutrition they would gain weight, become stronger and thus, be able to hold their own.

Every 3.5 hours I filled a syringe with formula and fed just those three. The girl zoomed through the milk with gusto. One of the boys, sucked well too, though not with the power of his sister. But the small lad would do nothing for himself. I slowly dripped milk into his mouth trying to encourage him to swallow and felt at first that I was getting somewhere. But, late last night I realised that things were becoming serious. The blue girl by this time was clearly receiving food from Prune and no longer needed help but the boys were fairing less well.

I was encouraged by a small weight gain in them both, but they stubbornly remain well below the triple figures the girls have by now achieved. My tiny boy though was becoming weaker, showing signs of clear distress. I upped the anti, providing a smidgen of Manuka honey 15+, Kitty Stim and small hourly feeds. Id got little output from his back end, but finally a poo. Sadly though, it was all too late and, the next time the hour chimed he was cold but was still moaning. It really was last chance saloon.

I placed him on my chest and rubbed him trying to warm him, to get some food and fluid into his body. But to no avail and he died at around 4pm. As I said, this is not uncommon, breeders of such delicate cats, know well that they will have to take a loss on the chin, particularly in a litter of,this size or larger. It does it stop it feeling desperately sad when your effort and care fails and a life fade slowly away.

Back in the nest box, the 4 remaining siblings are getting the hang of things. I was at last able to assist the blue boy to latch on to mum where he began sucking and kneading. Keen to ensure he was not bulldozed off by the black sisters I ensured that he was undisturbed, placing the eager sisters at their own tests and like little ducks in a row, the 4 shared a meal. 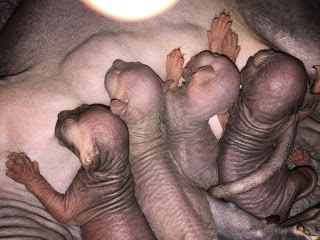 I am determined that I will learn some new skills before my next litter comes - I will be able and prepared to give life-saving hydration & electrolytes subcutaneously.  I will not be reticent about tube feeding much earlier rather than being hopeful that syringe feeding will be enough on its own. Those measures, had I had that knowledge or experience, may have saved him, but I will never know that, and I still have to accept that in breeding a kitten loss is considered normal.