It’s been a while since we posted, and honestly it’s with good reason, so here’s what’s happened since our last post:

After little Wonky sadly died, we were left with one female kitten to raise, she was named Nebula by her new family who I’m delighted to say, are the same family who had purchased “Pot” Noodle’s first kitten - The monicker Pot became Gamora; or Mora for short.

As before Nebula was raised on a raw diet which suited her well. She quickly adopted use of a litter tray and as soon as she got mobile had no hesitation in making the whole house her territory.

The 12 weeks we enjoyed with Nebby were full of fun. I had suddenly sold my house and packing to move and even made the move to the new home (still in Hampshire) with her. All three ladies coped very well with this. There was never any little accidents nor problems of any kind.. once we were in and doors closed, I simply opened the crate door and let them explore. They found there food, water and litter trays and all the little spots were they would find patches of sunlight to bathe in or radiators to sit upon!

What was really lovely for me throughout it all was to witness Prune, who was at first rather terrified of the kittens I had brought home with me, become such a natural ‘mother’. On day one, she would stand on her hind legs like a meerkat to view Noodle laying in her box with these squeaking kittens from afar, jumpy & assessing how much of a danger they might be to her... but as each day passed the meerkat stance became not one of watching for danger, but one of nosiness. She soon tested the waters going nearer and nearer until at last she was beside Noodle and her baby all the time watching Noodle mothering with such interest. She began to help out, cleaning and licking the kitten as she had seen Noodle do. As the weeks passed Prune & Nebula became inseparable. It was truly delightful to see. They are in fact half sisters with the same paternal genes and I wondered has this somehow made the bond happen so naturally? Is there an instinctual recognition there?

As you can see Prune & Nebula were thick as the proverbial thieves! 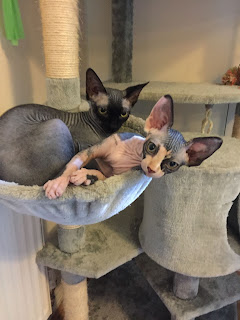 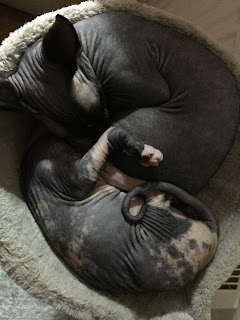 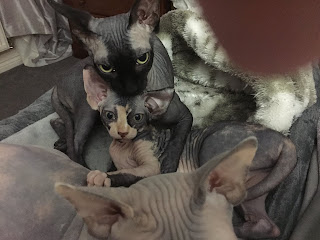 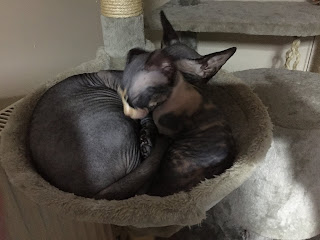 This natural bonding showed itself again when Nebula went to her new home, by now, of course fully weened. There she met her big sister for the first time and as you would expect there was hissing from Mora at this stranger in her home. Nebula had so such issues and did all she could to say hello.

On day 4 something quite magical happened, she was suckling on Mora as if she was her mother. She never suckled Prune when she was here, and Mora is neutered and has never mothered, but she allowed Nebby to suckle from then on and the pairing of these two has been extraordinarily successful. I’m told there is no squabbling at all... is it that these two sisters who share the same parents but we’re born a year apart somehow recognised each other? The kinship with her half sister Prune and now with her full sister seems to suggest they may do. 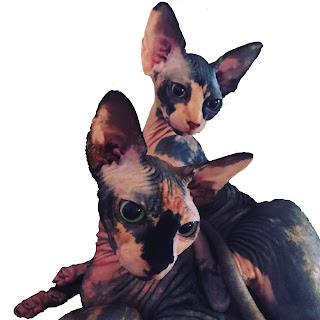