Pot's first consultation with the vet

Today marked the 9th week for Noodle's little girl... well, I say little... she weighed in today at just over 1kg... from her birth weight of 103grams that's very impressive and a big well done to her mummy for producing so much nourishing milk and to Pot for getting so stuck in to the raw food diet.

Having had her weight taken, her heart and lungs were listened to and her mouth and teeth checked. Whilst those tasks were accomplished the vet and I discussed the vaccine, and I decided that I would forgo the feline leukaemia part of the vaccine this early on and felt very happy indeed to know that if Pot's New Owner wanted her to have it later on, there is no reason why she could not have that part of the vaccine only given individually or added in at the next annual booster. He referred to it as a bolt on which made me smile. We both held her so that there was no chance of her wriggling during administration and brave girl Pot didn't even squeak when the jab was given!

Next she was then given her worming pill. She took this incredibly easily, all credit to Phil our vet for that great talent as I'd never ever seen it done that fast and without any kind of fuss.

Dabbed onto her head next with delicate fingers was a spot on treatment for safeguarding her against parasites.

We decided to wait to have the microchip inserted until 12th January when she has her 2nd vaccination.

While this was all going on, Noodle sat very calmly watching on. I love that she never takes her eyes off of her daughter and monitors her so closely.

All I needed to do was pay up!

I have managed to get some fabulous photos of my beautiful girls this week... this one in particular melts my heart. 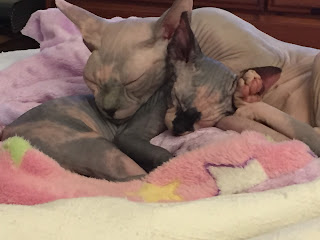