I’m totally delight that during this week I’ve received regular updates on Elvira & Louis’ progress as they set out in their new lives.

Elvira was pretty angry upon setting eyes upon her new Sphynx brother, Ash. She adopted the sideways on arched-back pose to appear as large as possible, along with hissing and swearing telling him in no uncertain terms that he was not to bother her, and she stuck to her ‘cave’ the carry bag in which she had travelled to her new home. Ash probing himself to be the kind and gentle soul he is, sat outside of the ‘cave’, looking in through the mesh sides, gazing in at her,  waiting as long is it was going to take for her anger to subside. On day two Elvi came out of her cage and had stopped making quite such a fuss, on day three she allowed him to come close enough to touch her and by day 4 the magic happened with Ash as big spoon and her snuggle in as little. Of course, there’s also a lot of play time too. Her other new brother Shady, is more of an outdoor fellow, and not really cuddle cat who apart from seeing she was now living in his home base has shown little interest in her, or she in him.

Louis, who left a day after Elvi, has settled in rapidly. He had no other pet siblings to meet, just a whole family who were ready to dote upon him. When on day two Maurice updated me on Louis’s vet visit saying that his heart and lungs could not be listened to because “ he cannot stop purring” I felt very relieved and contented about this because Louis had always been a purrer, who would burst into purring the moment I was in sight or near him, always seeking me out for cuddles. Knowing he was as happy and contented already with his new family and just as generous with his affection with them as he had been with me allowed me to relax and let go of my nervous concern for him.

Prune hardly seemed to notice they had gone since as it happened she had other things on her mind at exactly the same time having come into heat with some gusto! While not as vociferous as Noodle used to be over it, she was noticeably more demonstrative and needy than ever before.

This week, with only Lux & Karma here, life has taken on a slightly different pace. There is less competition for food, but also with two less playmates for them to get into mischief with there was, at first, a little less excitement. While games of chase had gone on sometimes with all 6 of them gadding about, Noodle & Prune had held back, however, with two kittens gone, what I noticed was that they began to charge about more in the manner they used to do. Perhaps they were less worried or felt they had more space? So, while there were now 4 rather than 6, the games of chase had gone to a whole new level! 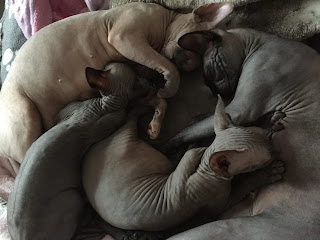 Lux is the cuddle-bunny of the two but also the loudest and bossiest. Karma is less demonstrative, and more easy going, though it has to be said both enjoy being fussed.  Both kittens still want to suckle for comfort and when all 4 are together there is a choir of purring. Noodle still performs caring tasks for them as much as, and perhaps more so that Prunee does and several times Lux has suckled Noodle rather than her birth mother.

Karma & Lux are here not for just one more week before they will go off to their new lives. They are ready and I think, actually so is Prune. She seems often caught between treating them as babies whom she must still tend to dutifully or otherwise remaining slightly less accessible to them. 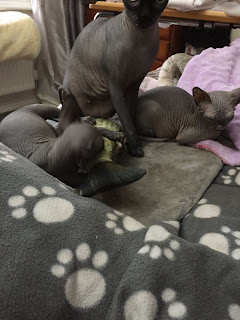 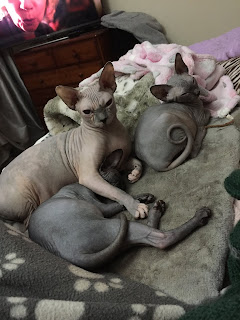