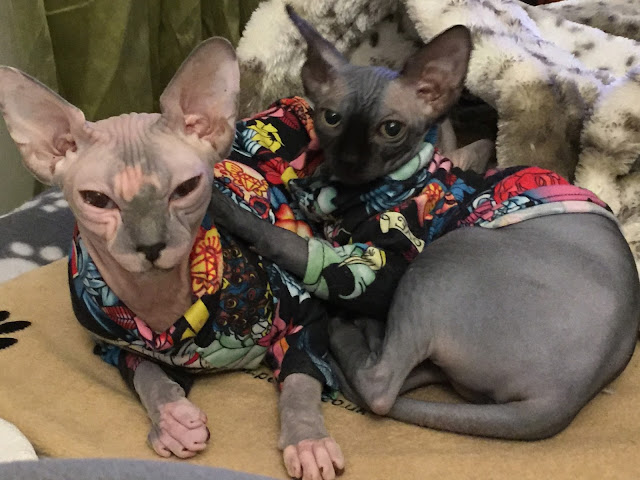 The girls have been settling in together - Prune has been here for 26 days now. They look so cute here in matching T-shirts.

Poor Noodle, having sold her kitten, I then brought in another, and so her teats were still in demand. Not that there is any milk, but as a comfort aid. And, though she has been patient, she doesn't like it! Putting a T-shirt on was a way to provide her with some peace and once her teats are left alone, they will not be subjected to sharp teeth during overzealous stealth comfort suckling.

Poor Noodle - she has had a rough time. She got a problem just before giving birth which resulted in some nasty skin issues, then she had to have a cesarean, followed by learning to be a mother and bringing up a kitten. She was worn out and got run down. Then we had Christmas and she was so patient as lots of people wanted to see and hold her baby, then doing her a favour, I brought Prune in to the house a few days before her own kitten was due to leave hoping that, since she had a kitten, she would maybe accept Prune as hers too, and that also having Prune here would ease her grief when hr own kitten left. She was very very angry at first and mistrustful of this new kitten but within 4 days, Prune was suckling her and cuddling up with them both.

On top of this, I also changed her feed regimen from a dry commercial kibble free fed diet to a frozen minced BARF diet.

One day, just around the time her kitten was to go, she came into heat for the 4th time since giving birth. She meowed frantically. And then her meow broke. I thought it was that she had meowed herself hoarse, but it didn't resolve despite the vet listening and checking, and administering a long-acting antibiotic injection and prescribing a course of anti-inflammatory meds. Noodle's throat remained sore and with a lively kitten wanting attention from her she got more and more depressed.

Role on another week, and following a general anaesthetic, x rays, swabs sent to a lab and more antibiotics, this time as twice a day tablets, more anti-inflammatories and I have almost got my old cat back. Her meow is not quite what it was before.. but it is being used, she trills with pleasure as she and Prune run around and play and she asks for food and is even now strong enough to complain about taking tablets.

I am poorer financially by a long long way but my much adored cat is better. She is going to be given a nice long holiday now without being mated (no matter how often she asks) and time and food to regain all her weight, vitality and strength.